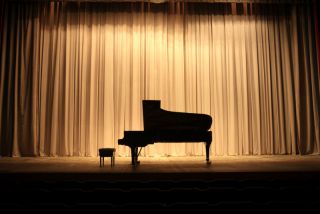 Scientists have pinpointed the region of the brain that makes people stumble when anxious about performing in front of others, such as during a piano recital.
(Image: © Chubykin Arkady / Shutterstock)

If the thought of a solo recital gives you the jitters, instead of picturing everyone in the audience naked, try imagining a positive scenario like an encouraging audience or the sound of applause. A new study finds that these types of thoughts might be helpful in reducing anxiety about slipping up in front of an audience.

When performing in front of a crowd, people are typically hyperaware of others observing them. Now, scientists have found that when the part of the brain that notices others judging is activated, another region that controls fine sensorimotor skills shuts down. This area, called the inferior parietal cortex, is to blame when people tense up and stumble while performing complex tasks, such as playing the piano, in front of an audience.

"It's true that it's all in your head," said study senior author Neil Harrison, a professor of neuropsychiatry at the University of Sussex in the United Kingdom. [Understanding the 10 Most Destructive Human Behaviors]

Although the social effects on motor control are well-documented, the precise neural mechanisms at work when the presence of observers results in a change of output have not been previously studied, Harrison told Live Science.

For the new study, researchers monitored the brain activity of 21 volunteers while they performed a task that required them to exert a precise amount of force when gripping an object. The participants carried out this task while watching footage of two people who either appeared to be observing the participant or evaluating someone else.

As expected, the participants reported they felt more anxious when they thought they were being watched. They also gripped the object harder without realizing it under these circumstances.

Brain scans using functional magnetic resonance imaging (fMRI) showed that the area of the brain that decodes other people's facial expressions and movements — the posterior superior temporal sulcus — was more active when participants thought they were being watched. What was more surprising, though, was the inferior parietal cortex — which controls fine sensorimotor skills — became deactivated in those same instances, the researchers said.

Normally, these two regions interact in a "mentalization" process that allows people to pick up on subtle clues relating to what another person is thinking, based on their facial expressions, according to the researchers. If people perceive their observers as well-wishers, they typically perform well. But when people pick up on any negative cues from observers, the connection between these two regions becomes impaired, and this may be what gives rise to "the yips" in athletes, musicians tensing up, and even a person faltering on a driving test, according to the study.

"This is something that affects everybody," Harrison said. "Certainly, it does affect elite athletes, but it's also there in amateur performers as well."

The scientists also found that a large audience is not necessary for the inferior parietal cortex to shut down, nor did it matter if a participant noted an obvious jesting or worried expression from an observer. Instead, the mere presence of others whom the participants believed to be judging them could give rise to this sort of anxiety and decrease in motor performance, the researchers said. And it's possible that the same pathways are involved when a person has a fear of public speaking, because the vocal cords are just another muscle, Harrison said.

By training in front of a supportive audience, people could strengthen the connections in their brains, Harrison said. For example, before an actual public performance, a musician could perform in front of family and close friends and receive a lot of applause. This might re-train the neural network, and it's something the researchers are planning to study next, Harrison added.

The new study was published online Jan. 20 in the journal Scientific Reports.