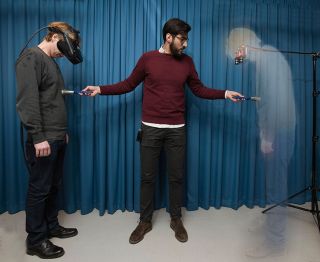 Scientists gave people the illusion of having an invisible body by having them view empty space where their body should be, and stroking them with one paintbrush while stroking the air with another.
(Image: © Staffan Larsson)

Who hasn't dreamed of having an invisibility cloak like Harry Potter's? While these don't yet exist in reality, it is possible to give people the illusion that they're invisible, new research suggests.

Using clever camera angles, virtual goggles and physical caresses, a team of researchers was able to make people feel as if they had an invisible body. Furthermore, feeling invisible reduced the anxiety brought on by standing in front of an audience, the researchers found.

Humanity has long been fascinated with the idea of becoming invisible. People with amputated limbs often report the sensation of having a "phantom limb," and advances in materials science have succeeded in cloaking small objects and, recently, even living animals. [Eye Tricks: Gallery of Visual Illusions]

"We're still at a very early stage, but it's not impossible that, in a decade or two, we might be able to cloak macroscopic objects, like a human limb or [an entire] human," said Dr. Arvid Guterstam, a neuroscientist at the Karolinska Institutet in Sweden and co-author of the study, published today (April 23) in the journal Scientific Reports.

In a previous study, Guterstam and his colleagues demonstrated that it was possible to trick people into feeling that an invisible hand was their own. In the new study, the researchers wanted to give people the illusion of an entirely invisible body.

The researchers recruited 125 healthy volunteers for eight different experiments. The volunteers wore head-mounted displays that provided real-time video from two cameras set up in the corner of a room at the participants' head level; the cameras were facing the floor, so that when the participants looked down, their bodies would appear to be empty space.

Then, the researchers used a paintbrush to stroke different parts of each participant's body while simultaneously moving another paintbrush in the corresponding part of the camera's view, to give the participant the illusion that the brush was stroking an invisible body. The brush was applied to the stomach, the lower arms, the lower legs and the feet.

In one set of experiments, the researchers applied the brush strokes to each participant's body in and out of sync with the strokes on the invisible body, or in nonmatching parts of the body, to determine whether it would affect the illusion. As the researchers expected, the synchronous and spatially matching strokes produced a stronger feeling of ownership of the invisible body than the mismatched strokes.

The volunteers also filled out questionnaires to report how strongly they identified with the invisible body.

In another set of experiments, after the participants experienced one minute of the invisible body illusion, they were placed in front of an audience of "serious-looking strangers" (other researchers), mimicking what is generally regarded as a stressful social situation. The idea was that, if people were to see their own bodies as invisible, they might think they were invisible to others, too.

Meanwhile, the researchers measured the participants' heart rates and asked them to rate their stress level. They found that when the participants perceived themselves to be invisible, their heart rates were lower and they reported feeling less anxious.

In other words, "Having an invisible body seems to have a stress-reducing effect when experiencing socially challenging situations," Guterstam told Live Science. Perhaps the illusion could be used as a form of treatment for social anxiety, he added.

In the future, Guterstam and his colleagues plan to do a brain-imaging study to see which brain areas interact when a person experiences the invisible-body illusion.

They also plan to study whether feeling invisible affects a person's moral compass, by exposing him or her to a number of moral dilemmas while under the illusion.