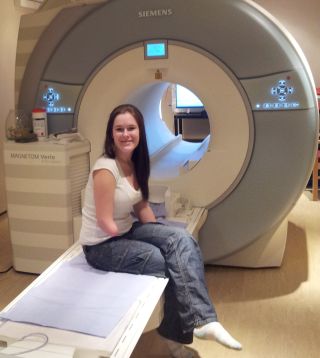 An amputee suffering from phantom pain maintains a representation of the phantom hand in their brain.
(Image: © Tamar Makin)

The phantom limb pain many amputees experience may be linked to residual representations of that limb in the brain, a new study finds.

"About 80 percent of amputees experience phantom pain," lead study author Tamar Makin, a neuroscientist at Oxford University, told LiveScience. "For many, the pain is debilitating, interfering with their day-to-day lives."

The causes of phantom pain have long baffled scientists, and treatments are limited. The brain is known to have a sensory "map" of different body parts, and previous research suggested that phantom pain results when the part of that map that represented the former limb is taken over by representations of other body parts (like the face and lips), a phenomenon known as plasticity. But new research suggests the ghost pain stems from lasting representations of the amputated limb. The findings are detailed today (March 5) in the journal Nature Communications.

Pain in the brain

Using functional magnetic resonance imaging (fMRI), which measures changes in blood flow due to brain activity, Makin's team scanned the brains of hand amputees, two-armed individuals, and people born with only one hand. As the participants were being scanned, they were told to move their hands, arms, feet or lips. Amputees with phantom pain were told to perform the movements with their phantom limb, whereas amputees with no phantom pain and those born without a hand were told to simply imagine moving their hand or arm. [The 9 Most Bizarre Medical Conditions]

The scans showed that amputees with phantom pain had the same pattern of brain activity as individuals with both hands. This was a huge surprise, Makin said. "If we take an individual who suffers from phantom pain, his brain would be indistinguishable from your brain."

In addition, the phantom pain was linked to disrupted activity between different parts of the sensorimotor cortex, the part of the brain that processes touch and movement.

"Makin and co-workers have directly challenged the notion that phantom pain as a consequence of limb amputation derives from reorganization of body parts that are represented in the somatosensory cortex [a mental map of body parts]," neuroscientist Elena Nava of the University of Hamburg, who was not involved in the study, told LiveScience.

But physiotherapist Lorimer Moseley of the University of South Australia, who was not involved in the study, disagreed. The two explanations of phantom pain are different paradigms, Moseley said — "there is no reason to suggest that one is true and the other is not." However, he challenged the interpretation that the pain causes the brain remapping, because the experience of pain arises from the brain, he said.

The problem, Makin said, is the study shows that pain and remapping are correlated, but does not show that one causes the other.

Nevertheless, the study "confirms the idea that we might be able to treat phantom limb pain by treating that brain-map," Moseley said.