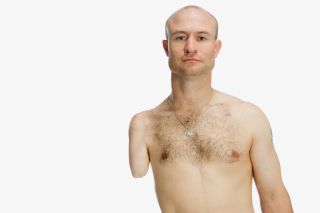 Nearly all amputees feel, at some point, that their missing limb is still there. Why?

This phenomenon is called phantom limb syndrome. Most commonly, it causes pain, but occasionally someone with this syndrome will also feel as though the missing limb is still attached and functioning.  They may even feel the sensation of clothing brushing against the limb.

The syndrome was first reported in the 1550s, when French surgeon Ambroise Paré noticed that his amputee patients — mostly soldiers — often complained of pain in their missing parts. But, it took more than 400 years for scientists to explain why.

In the 1990s, neuroscientist V.S. Ramachandran of the University of San Diego discovered that the brain’s ability to form new neural connections might cause the syndrome. Areas of the brain responsible for perceiving touch sensations from other parts of the body — the face, for example — appeared to be taking on the sensation from the missing limbs. When touched on the existing body part — in this case, the face — the patient feels the same sensation in the phantom limb.

Today, phantom limb syndrome can be treated a variety of ways. A common approach involves prescribing drugs, including antidepressants, anticonvulsants, opioids and other painkillers, or muscle relaxants. Some sufferers respond to electrical or magnetic nerve stimulation.

A non-chemical treatment is the mirror box, a lidless box that is partitioned through the middle by a two-sided mirror. Here, the patient puts both the intact and phantom limbs through two holes cut into the side of the box, so that each sits on either side of the mirror divider. The patient looks into the top of box at an angle, so that the reflection of the real limb is visible in the mirror.

The mirror makes it appear as though the limb’s reflection is actually the phantom limb. As the patient starts moving the real limb, the brain is tricked into thinking that it is moving the phantom one, which gives it a sense of control over it. While this relieves the pain in many patients, the precise neurological mechanisms behind it remain unknown.

And now, there may be an even cleverer treatment: Last month, an Xbox Kinect hacker altered that gaming device to create a virtual room in which an amputee has all limbs.  This may act in a similar way as a mirror box by tricking the mind into thinking the limbs are real and somehow resetting the brain to erase the pain.