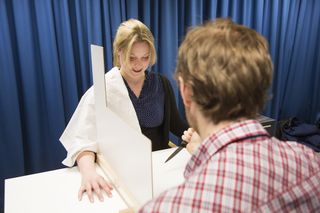 The brain can be so convinced that an invisible hand is part of the body that people sweat when the "hand" is threatened with a knife.
(Image: © Gustav Mårtensson)

Amputees often suffer from a phenomenon known as phantom limb syndrome, but researchers now say that non-amputees can also be made to feel phantom limbs, and even pain, when knives are jabbed into nonexistent hands.

These findings reveal how malleable body image can be, and could help lead to therapies that help patients with phantom limb syndrome and other disorders feel more at ease with their bodies.

In phantom limb syndrome, people suffer from the illusion that a limb exists even if it is missing. Doctors have known of this syndrome since the 16th century. (After Lord Horatio Nelson lost part of his right arm during a battle in 1797, he said he felt fingers pressing into his missing palm, sensations the admiral cited as direct evidence for the existence of a soul.) [9 Most Bizarre Medical Conditions]

Phantom limbs occur in 95 percent of amputees who lose an arm or leg. There are more kinds of phantoms than just limbs — people have reported phantom nipples, phantom appendix pains, phantom menstrual cramps after hysterectomies, and even phantom erections from phantom penises. People also say they feel phantom sensations of wristwatches or rings worn on the missing arms.

Not only can the mind fool people into thinking a missing limb is there when it is not, but experiments prove that people can be fooled into thinking another object is part of them. The deception is known as the rubber hand illusion.

To play this trick, start with a table with a screen running up its middle, and sit in front of the table so the right arm is hidden from view. A fake right arm is visible on the table. If both the right hand and the rubber hand are simultaneously stroked with a brush for a few minutes, a 1998 study found eight of 10 volunteers experienced the disarming illusion that the dummy hand was their hand.

Now, researchers find not even a rubber hand is needed to create an illusion of a phantom limb. Surprisingly, an invisible hand will work, too.

Scientists performed the rubber hand illusion with 234 healthy adult volunteers, only instead of brushing a rubber hand, they imitated brushing movements in midair in full view of the participants.

"We discovered that most participants, within less than a minute, transfer the sensation of touch to the region of empty space where they see the paintbrush move, and experience an invisible hand in that position," said researcher Arvid Guterstam, a neuroscientist at the Karolinska Institute in Stockholm.

To show the invisible hand illusion actually worked, the researchers made a stabbing motion with a knife toward the empty space "occupied" by the invisible hand and measured the participant's sweat response to the perceived threat. They found the volunteers became stressed while experiencing the illusion. [See Images of the Invisible Hand Experiment]

In another experiment, the volunteers were asked to close their eyes and quickly point with their left hand to where they perceived their right hand was. Those experiencing the invisible hand illusion would point at the invisible hand rather than their real hand.

"Considering that we are born with and have a lifelong experience of having a physical body, I find it remarkable that the brain so quickly and easily can be fooled into accepting an invisible hand as part of one's own body," Guterstam told LiveScience. "Taken together, our results show that the sight of a physical hand is remarkably unimportant to the brain for creating the experience of one's physical self."

The scientists had previously found objects that did not resemble body parts, such as a block of wood, cannot be experienced as one's own hand, "so we were extremely surprised to find that the brain can accept an invisible hand as part of the body," Guterstam said. They had conducted the experiment with empty space expecting no illusion to occur, to serve as a baseline for comparison to other research.

Why did people embody empty space as their own hand but not objects such as blocks of wood?

"We believe that the crucial difference lies in that we are very used to feeling our hands without seeing them, and we can move our hands in empty space but not through solid objects," Guterstam said. "The empty space close to the body represents an array of potential locations for the limbs."

The researchers scanned the brains of 14 volunteers using functional magnetic resonance imaging (fMRI). Perceiving the invisible-hand illusion led to increased activity in the same parts of the brain that are normally active when individuals see their real hand being touched or when participants experience a prosthetic hand as their own.

"This is what we believe happens in the brain when participants starts to experience the illusion — when the brain creates the experience of the hand I see is my own, it uses information from different senses, including vision, touch and signals from the muscles of the arm," Guterstam said. "When we elicited the invisible hand illusion inside an MRI scanner, we found that experiencing the illusion lead to increased brain activity in so-called multisensory brain regions, which we know integrate signals from the different senses. It therefore seems as if these areas of the brain automatically associate the sight from the brush moving in empty space with the touch felt on the real hand, leading to the bizarre consequence that one feels touch in midair and perceive having an invisible hand in this location."

In the future, the researchers would like to see if people could experience an entire invisible body as their own — to see if they can induce an 'invisible man illusion,'" Ehrsson said.

The researchers also plan to perform studies "to find out if the invisible hand illusion and phantom sensations in patients share the same underlying brain mechanisms, and if it is possible to use this illusion to manipulate the experience of phantom pain," Guterstam said.

There could be important differences between the invisible hand illusion and phantom sensations, Ehrsson said. "For example, signals from damaged nerves could contribute to phantom limbs and phantom pain in a way that would be different from our illusion in limbed-individuals," Ehrsson said.

The scientists detailed their findings online yesterday (April 11) in the Journal of Cognitive Neuroscience.