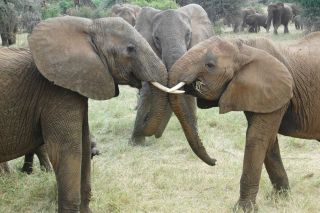 When older members of an elephant family are killed, younger female elephants assume the roles once held by their mothers, maintaining the networks that keep extended families together, a new study has found.

Over a 16-year period, researchers evaluated the changing social dynamics in groups of elephants in western Kenya as mature matriarchs were killed by poachers who hunt elephants for the ivory in their tusks. Not only did younger female elephants take up new social positions when an older matriarch died, but the links they forged with other elephant daughters mirrored connections once held by their mothers. [Walk with Elephants: Explore African Sanctuary on Google Street View]

Earlier research had established that elephant social structure is highly complex. In the new study, the researchers analyzed relationships within groups of elephants over time, to understand how their social positions and connections could grow and change.

The scientists paid especially close attention to mother-daughter relationships. Female elephants are known to hold important leadership roles in elephant social groups, and the researchers were curious to discover how mother elephants might prepare young females to forge their own connections and assume adult social responsibilities.

But African elephants face a stress that can devastate even the strongest social networks: poaching. According to the World Wildlife Fund, tens of thousands of elephants are poached each year. African elephant numbers have plummeted from 5 million in the last century to an estimated 470,000 in 2015, with 40,000 killed in 2011 alone. Elephants' tusks — extended incisor teeth — are greatly prized for their ivory, and growing demand for ivory products in the Far East fuels the poaching, despite a 1990 global ban on international ivory sales, according to the Convention on International Trade in Endangered Species.

The bigger the tusks, the more valuable they are to poachers, so older elephants with the biggest tusks are poachers' favorite targets, the study reported. Older female elephants are also likely to occupy important roles within the "connectivity hub" of the group's social network, the scientists found. Poaching not only dramatically reduces elephant populations, but could also be destroying the bonds that hold groups together.

After 16 years, scientists reported that an estimated 70 percent of the individual elephants occupying important social roles in the group had been replaced. They found that they could predict which younger elephants would step into vacant roles, based on whose mother had previously held that position, establishing connections to other young elephants whose mothers had interacted closely with their own mother, even if these young elephants had not previously been seen to spend much time together.

Elephants' social flexibility in spite of poaching provides a ray of hope for the sustainability of their populations, according to the study's first author, Shifra Goldenberg, a doctoral candidate with George Wittemyer's lab at Colorado State University.

"The fact that elephants are socially resilient is an important and exciting finding, showing their innate resilience to this unfortunate human pressure," Goldenberg said in a statement.

The findings were published online today (Dec. 17) in the journal Current Biology.