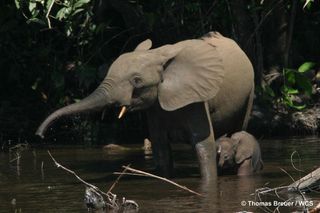 About 65 percent of forest elephants were killed, mostly for their ivory, across central Africa in the last decade, new research finds.

The grim numbers were released at a wildlife trafficking symposium in London this week to update a study published last year in the journal PLOS ONE, which described the "catastrophic" 62 percent decline of the region's forest elephants from 2002 to 2011. Now, field data from 2012 and 2013 show that the plight of elephants has gotten slightly worse.

"At least a couple of hundred thousand forest elephants were lost between 2002-2013 to the tune of at least 60 a day, or one every 20 minutes, day and night," study researcher Fiona Maisels, a biologist with the Wildlife Conservation Society, said in a statement. "By the time you eat breakfast, another elephant has been slaughtered to produce trinkets for the ivory market.”" [Elephant Images: The Biggest Beasts on Land]

In their original study, the researchers estimated that the population of African forest elephants was less than 10 percent of its potential size — only about 100,000 individuals were living in an area that historically could have harbored more 1 million. What's more, the elephants were spread across only a quarter of their potential range.

Nearly 60 percent of the remaining forest elephants can be found in the relatively small West African nation of Gabon, according to WCS officials. Meanwhile, the Democratic Republic of Congo, a country nearly nine times larger than Gabon in area, has a far smaller population of elephants.

"The current number and distribution of elephants is mind-boggling when compared to what it should be," study author Samantha Strindberg said in a statement. "About 95 percent of the forests of DRC are almost empty of elephants."

Several governments have been responding to conservationists' calls for action. The United States, China, Hong Kong, the Philippines and Gabon, for example, have either destroyed or pledged to destroy their ivory stockpiles in largely symbolic moves to delegitimize ivory as a commercial product. On Wednesday (Feb. 12), the Obama administration announced that the United States will ban the domestic commercial trade of elephant ivory.

The new data was unveiled at the United for Wildlife International Wildlife Trafficking Symposium taking place Feb. 11 and 12 at the Zoological Society of London.