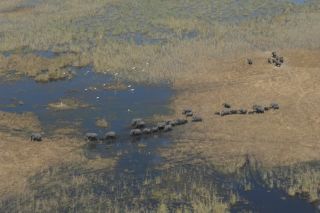 NEW YORK — How many elephants are there in Africa? Nobody knows, and nobody has really attempted to count them all at the same time. Until now.

Mike Chase, an elephant biologist based in Botswana, will lead the first pan-African aerial survey to count elephants in 22 countries. The project is funded by a $7 million grant from Microsoft co-founder Paul Allen and his company, Vulcan Inc., and will involve 46 scientists and 14 small aircraft.

The results will help conservationists, scientists and policymakers protect African elephants from poachers, Chase told LiveScience. Poaching is at "crisis" levels, Chase said — there are now about 50 percent fewer elephants than there were 35 years ago, according to various estimates, although exact number are hard to come by. Chase seeks to change that. "How can we conserve that which we don't know?" asked Chase, a no-nonsense man with a southern African accent and an obvious passion for elephants. But one gets the sense that he doesn't like to carry on and on about it — there's work to be done. [Elephant Images: The Biggest Beasts on Land]

Elephants are poached for their ivory, which is made into trinkets and is highly in demand in China and Southeast Asia. About one African elephant is shot every 15 minutes on average, which adds up to 100 per day across Africa, said Chase, who has short-cropped hair and wore a tan shirt, seemingly ready for a safari even in New York City.

Some critical populations of elephants, such as those in Ethiopia, haven't been counted for 10 years, and no comprehensive Africa-wide survey of elephants has even been done or attempted, Chase said.

The elephant census will count more than 90 percent of the continent's savannah elephants (distinguishing them from endangered forest elephants, which live in the forests of the Congo).

Each small airplane will carry a pair of highly trained elephant counters, who will tally all elephants encountered by sight, Chase said. Photographs will also be taken of the animals, as well as high-definition video. The imagery will be checked to verify visual counts, he said.

To count elephants, Chase and his team plan to fly transects that are 2 kilometers (1.2 miles) apart, looping back every 10 minutes so as to not double-count animals. This should allow them to count about 20 percent of the animals in any given area, he said; statistical models will then help the researchers extrapolate to estimate how many elephants are present between the transects.

The count will mostly take place during the dry season, when elephants congregate near water. This will make the animals easier to count, and also means they are less likely to move around quickly, Chase said.

The project will begin in February 2014, and most of the counting should be done within one year, Chase said. Data analysis will take about another year, and the team hopes to have final results by 2016, in time for an international meeting that year on wildlife trade in South Africa, put on by the Convention on International Trade in Endangered Species of Wild Fauna and Flora (CITES). This agreement has been signed by most countries worldwide and its goal is to ensure that the trade in wild animals and plants doesn't threaten their survival.

Dickson Kaelo, CEO of Kenya Wildlife Conservancies Association, told the Guardian the census is long overdue. "It's unacceptable that we don't have accurate data showing how many elephants there are and where they are," he said.

As part of the project, Chase and his colleagues will also count every single elephant in parts of northern Botswana, which is the largest remaining stronghold for the animals. About one-quarter of all African elephants live there, he said.

The study results will help scientists and conservationists decide where to focus their efforts, he said.

"Good science in the end will help save the African elephant," Chase said.