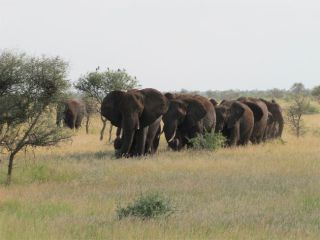 The savanna elephant weighs between 6 and 7 tons, roughly double the weight of the forest elephant.
(Image: © A. Schaefer.)

Everyone is taught that there are two species of elephants – the African and the Asian – but new research is suggesting this isn't the whole truth. The "African elephant" is actually two species, as evolutionarily different as lions and tigers are from one another.

"It's really a remarkable degree of divergence between the two," said study leader Alfred Roca of the University of Illinois at Urbana-Champaign. "The forest and savanna [elephants] are as different as the Asian elephant and woolly mammoth."

Roca and his collaborators discovered the evolutionary discrepancy by analyzing DNA of the living elephant species and two of their extinct evolutionary cousins, the woolly mammoth and mastodon. The study is published in this week's issue of the journal PLoS Biology, and is the first sequence of these extinct animals' nuclear genomes, which is the DNA that resides in the nuclei of cells and gets passed down to offspring by both parents. (By contrast, mitochondrial DNA hides out in the energy-making structures of cells and is only passed down by females.)

"The thing that caused them to split was climate change – Africa became drier and the forest retreated," Roca told LiveScience. "These are the same factors that lead to the divergence between humans and chimpanzees."

The forest elephant is smaller, and is sometimes referred to as the "dwarf African elephant," standing at about 8.2 feet (2.5 meters) high compared with the savanna elephant's 11.5 feet (3.5 m), and weighing about half as much. The forest elephant also has straighter tusks and oval-shaped ears.

"It's important to classify the two as different species for the conservation aspects. You would want to develop a separate conservation plan for each one," Roca said. The African elephant is listed as endangered by the U.S. Endangered Species Act, and splitting the population into two different species places the forest elephant in much more dire straits. A little over a fifth of Africa’s 500,000 elephants are forest elephants, and their numbers are dwindling quickly as their habitats disappear and poachers kill them for their ivory tusks, Roca said.

The researchers also discovered that the forest elephant is less genetically diverse than the savanna elephant, which Roca thinks is due to the intense competition between males. With male-male fighting, only the strongest would get the gals and so few males would pass along their genes to offspring. The woolly mammoth shows similar low genetic diversity, which may mean they were also competitive, Roca said.

Sergios-Orestis Kolokotronis, a biologist at the Institute for Comparative Genomics at the American Museum of Natural History, who wasn't involved in the study, called it a "tour-de-force in the field of paleogenomics" that convincingly refuted earlier, misleading mitochondrial DNA studies of African elephants.

"The confirmation of an old split between forest and savanna elephants is of great taxonomic and conservation significance, as this can allow for species-specific management decisions," Kolokotronis said.