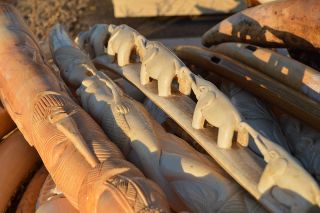 Six tons of carvings, jewelry, trinkets and tusks were being reduced to powder Thursday afternoon (Nov. 14) as the United States, for the first time, destroyed its ivory stockpile.

The U.S. Fish and Wildlife Service (FWS) had collected the items over the past 25 years through smuggling busts and border confiscations. Feeding the massive hoard into a stone crusher was intended to send a message that ivory is no longer a legitimate material to be used in commercial products.

Though the international ivory trade was banned in 1989, there are still domestic markets and lucrative black markets around the world where ivory is in high demand. Poachers kill more than 30,000 African elephants for their tusks each year, according to some estimates.  [See Photos of the Seized Ivory]

"Some argue that the seized ivory should be sold to alleviate the demand for ivory," Dan Ashe, director of the FWS, wrote in a blog post today.

"Decades of experience shows that allowing ivory to enter legal trade only makes enforcement harder, by giving traffickers ways to disguise sources of poached ivory," Ashe added. "It also fuels demand, maintaining the perception that ivory is a status symbol, rather than an emblem of greed and callous indifference to life."

The African Wildlife Foundation (AWF) echoed those arguments in its call for other governments to follow the United States' lead and destroy their ivory stockpiles, too. The AWF and other environmental organizations like the World Wildlife Fund (WWF) are also calling for the United States to go even further and place a moratorium on its domestic ivory trade.

The ivory crush was taking place at the Rocky Mountain Arsenal National Wildlife Refuge in Commerce City, Colo., just outside of Denver, with a star-studded list of speakers, including Kristin Bauer of "True Blood" and Kristin Davis of "Sex and the City." The event comes a day after Secretary of State John Kerry announced that the United States would award up to $1 million for information that leads to the dismantling of an infamous wildlife trafficking ring dubbed the Xaysavang Network.

"Based in Laos — with affiliates in South Africa, Mozambique, Thailand, Malaysia, Vietnam, and China — the Xaysavang Network facilitates the killing of endangered elephants, rhinos and other species for products such as ivory," Kerry said in a statement.

The crackdown is part of an executive order to fight wildlife trafficking that President Barack Obama signed in July. The initiative called for the formation of a new task force to address the issue and it allotted $10 million in aid for Africa's efforts to combat poaching and the illegal wildlife trade.

Other nations, including Gabon, Kenya and the Philippines, have also destroyed their ivory stockpiles in recent years. The United States has not revealed exactly what it will do with 6 tons of ivory dust, but Ashe said on his blog that the FWS hopes it will be used to design memorials to educate the public and build awareness about the plight of elephants.