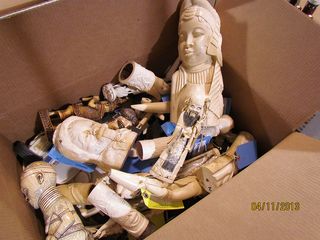 A box of ivory carvings headed for destruction as the United States plans to crush its stockpile of illegal ivory.
(Image: © U.S. Fish and Wildlife Service)

To combat elephant poaching, the United States is preparing to publicly pulverize its 6-ton stockpile of illicit ivory this week, which has likely left many wondering, why not just sell it instead?

Though ivory can fetch higher prices than gold, many conservationists argue that destroying confiscated trinkets, carvings and tusks rather than selling them sends a signal to buyers, traffickers and suppliers that ivory will no longer be tolerated as a legitimate commercial product.

Today the African Wildlife Foundation (AWF) called on other governments to follow the United States' lead and crush or burn their ivory stockpiles, too. [Elephant Images: The Biggest Beasts on Land]

"Right now, Africa is hemorrhaging elephants," Patrick Bergin, CEO of the African Wildlife Foundation, said in a statement. "The only way to staunch the movement of illegal ivory is to wipe out the demand, and that begins with destroying stockpiles and stopping trade."

The AWF is also urging countries to go a step further and halt their domestic ivory trade until all elephant populations are no longer threatened. After poaching halved Africa's elephant population in the 20th century, the international ivory trade was banned in 1989. Domestic sales, however, continue in countries like the United States and China. These lucrative legal markets give a cover — and a monetary incentive — for ivory smugglers, the organization argues.

"The stockpiles along with the legality of the ivory trade in some countries creates ambiguity and doubt, and makes law enforcement and the differentiation between legal and illegal ivory almost impossible," reads the AWF's position on ivory stockpiles. "These conditions create the impression that ivory is a legitimate commodity to be traded, held and speculated on, and which will hold or increase in value over the long term."

Currently, it's estimated that more than 30,000 African elephants are killed for their ivory tusks annually. Last year, a report from the Convention on International Trade in Endangered Species, or CITES, found that elephant poaching was at its highest in a decade.

The uptick in killings has been tied to an unsustainable demand for ivory, especially in Asia. Bergin argued that rising affluence in Asia and poverty in Africa has created "a perfect storm with elephants at the center."

"What the rich person demands, the poor poacher provides," Bergin said in a statement. "In between is a nefarious network of criminals, terrorists, rebels, and corrupted officials and business people only too eager to pilfer a slice of the pie."

The ivory crush will be a first for United States, but it follows similar acts by other countries. The Philippine government crushed and burned its ivory hoard earlier this year, and in 2012, and the Central African nation Gabon set fire to its confiscated ivory — all 10,637 lbs. (4,825 kilograms) of it.

Oftentimes destroying ivory isn't just a symbolic gesture. It can be costly to maintain and document the stockpiles and protect them from theft. According to the African Conservation Foundation, Tanzania spent $75,000 each year to secure its stockpile of 12,131 tusks.

The question of what to do with these stores, if not just destroy them, has sparked debate among conservationists in recent years. In 2007, CITES granted Botswana, Namibia, South Africa and Zimbabwe an exception from the international ivory trade ban to make a one-off sale of their stockpiles to China and Japan, with the proceeds going to conservation efforts. But at the next CITES meeting, in 2010, Zambia and Tanzania sparked controversy with similar requests. Zambia eventually withdrew its bid and Tanzania's proposal didn't garner enough votes.

CITES, in their 2012 report on the poaching crisis, said researchers have not found a link between these one-off sales and the recent rise in elephant killings. And while AWF noted that successful conservation investments came out of those sales, the group is now encouraging countries to take a more unified stance on the illegitimacy of ivory.