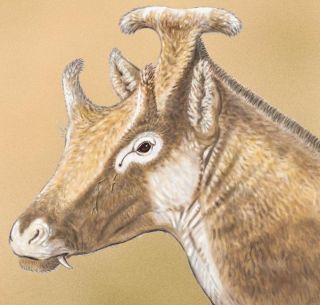 The newly discovered Xenokeryx amidalae is an extinct relative to giraffes that takes its name from Queen Amidala in the Star Wars franchise.
(Image: © Illustration by Israel M. Sánchez)

The "Star Wars" franchise may need to update its menagerie of wonky, alienlike creatures to include a boneheaded, short-necked relative of the giraffe.

The extinct relative of giraffes, Xenokeryx amidalae, takes its moniker from Queen Padmé Amidala, the wife of Anakin Skywalker (aka Darth Vader) in the "Star Wars" prequels.

The weird-looking creature may give Queen Amidala's hat maker a run for its money: X. amidalae had two ossicones (similar to horns) and a bizarre, T-shaped appendage sprouting from the top of its head, researchers noted in a study describing the creature. The stunningly preserved fossil was found in central Spain and is between 12 million and 16 million years old. [Image Gallery: 25 Amazing Ancient Beasts]

"These new fossils that we describe in the work have been very important because they have allowed us to describe new characters that were never described" in this ancestral family of animals, said study co-author Israel Sánchez, a biologist at the National Museum of Natural Sciences in Madrid.

The fossil was uncovered in 1992 in a region of central Spain known for its collection of palaeomerycids, an extinct family of odd-looking ruminants that roamed from the Iberian Peninsula all the way to China during the Miocene epoch (between 23 million and 5 million years ago). For the past two decades, the specimen had been languishing in the collections of the National Museum of Natural Sciences; the creature only got a second look when the team decided to examine it last year.

The fossil was incredibly preserved, with many of the skull bones intact. The creature was an oddball, with giraffelike ossicones on either side of its head but a very un-giraffelike neck, the researchers said. (A study published in November in the journal Royal Society Open Science recently discovered that giraffes evolved their long necks gradually over millions of years.)

"It has a short neck," Sánchez told Live Science. "It's powerful but not long."

Perhaps its most interesting feature, however, is the "Star Wars"-style headgear sprouting from its skull. These appendages are unlike any seen in modern-day giraffes or other ruminants, such as deer.

The fossils' stunning preservation also allowed the researchers to settle a long-debated question about palaeomerycids. Based on past, more incomplete fossils, some biologists thought palaeomerycids were closely related to deerlike animals called dromomerycids that once roamed North America.

The new research, which used both genetic data from living ruminants and the bones of living and extinct ruminants, found that X. amidalae is, in fact, more closely related to giraffes. Based on that finding, the team defined a new clade, or group of organisms descended from a common ancestor, that includes both giraffoids, which gave rise to giraffes, and palaeomerycids.

Though the creature is an extinct relative of giraffes, it probably wouldn't have sported the giraffe's signature spots, but would have had coloration more akin to that of a puppy, Sánchez said.

"The pattern of modern giraffes, or the savanna giraffe, is very derived, very evolved, very strange," he said.

The new findings were published Dec. 2 in the journal PLOS ONE.

Editor's Note: This article was corrected to note that Queen Amidala was secretly married to Anakin Skywalker, and was not his mother.