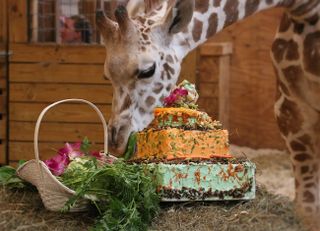 Around this time last year, millions of internet viewers were glued to their screens, captivated by the steady pacing of an unlikely celebrity — a heavily pregnant giraffe named April — as the expectant mother plodded around her enclosure, anticipating the imminent birth of her baby.

The infant — a male — arrived on the morning of April 15, more than two months after April's YouTube debut on Feb. 11. Born at 9:53 a.m. local time, his birth was raptly monitored online by more than 2 million people, according to representatives of Animal Adventure Park (AAP)  in Harpursville, New York, where April, the youngster and his father Oliver all live.

Now known as Tajiri (Swahili for "hope" or "confidence," his keepers reported), the baby giraffe has just celebrated his first birthday. AAP marked the occasion yesterday (April 15) with a party, sharing the event with his fans around the world by streaming the festivities live on the park's Giraffe Cam. [It's a Boy! See First Photos of Newborn Giraffe]

AAP kicked off the celebration at 10 a.m. local time, near the enclosure that Tajiri shares with April. Oliver is kept in a separate enclosure, and though he plays no part in raising the youngster, he and Tajiri still share time together in the yard, an AAP representative told Live Science in an email.

For the party, humans enjoyed snacks provided by a local bakery, while Tajiri and April feasted on a spread of giraffe food — lettuce and carrots — according to an AAP statement.

Tajiri is now nearly 10 feet (3 meters) tall, and though eating solid food, he is also still nursing, the AAP representative reported. But he is expected to be fully weaned from his mother soon, and once that happens, mother and baby will be separated. And Tajiri may be bound for a new home.

For now, at least, mother and baby celebrated the one-year milestone together. And yes, there was cake, prepared especially for the baby giraffe. While a human 1-year-old would likely prefer digging into sugary cake and icing, Tajiri's birthday treat was much healthier, with cauliflower and carrot "frosting" and decorations made from giraffe chow pellets, carrots and shredded romaine lettuce, an AAP representative told Live Science in an email.