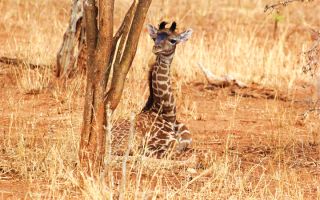 Newborn giraffes that have large and irregularly shaped spots have a better chance of surviving their first few months of life, according to a new study.
(Image: © Derek Lee, Wild Nature Institute/Penn State)

Can you spot the difference between coat patterns of mother giraffes and their gangly, knobby-kneed babies?

It turns out that similarities are surprisingly easy to find. That's because young giraffes inherit much of the detail in their spots from their mamas, and the distribution and shape of their spots determines how well the baby can hide from hungry predators, researchers recently discovered.

Giraffes' spots are commonly thought to provide protective camouflage for youngsters as they hide in the dappled light cast by vegetation, scientists reported in the new study. But until now, analysis of the animals' spot traits and how they benefit giraffes has been, well, spotty. The researchers decided to do something about that. [All in the Family: Giraffes Are 4 Species (Photos)]

For the study, scientists investigated wild Masai giraffes (Giraffa camelopardalis tippelskirchii) at the Tarangire National Park in northern Tanzania. Masai giraffes are known for the complexity and individual variation in their spots, according to the study.

Documenting and inspecting the spots on wild giraffes requires time and patience, lead study author Derek Lee, an associate research professor in the Department of Biology at Pennsylvania State University, told Live Science in an email. During the researchers' surveys, they went looking for giraffes by picking an area and then driving slowly along all the dirt roads. Once they located a group of animals, they would drive off-road to a distance within about 330 feet (100 meters) of the herd, and carefully maneuver into position to take photographs.

"Depending on how far the giraffes are from the road, how large the group is, and how dense the vegetation is, it can take a few minutes to an hour," Lee said.

The researchers used image-analyzing software to compare 11 traits in the giraffes' spots, such as the number of spots, a measure of the angle of the positioning of the spot and smoothness of the spot's edges and size. They found striking similarities between distinctive spot patterns in young giraffes and in their mothers. This suggests that giraffe coat patterns were passed down from mother to baby.

Records of individual survival in giraffe groups told the scientists more about the spots, enabling them to see if certain coat patterns were better at camouflaging vulnerable baby giraffes. They discovered that newborns with larger and more irregular spots had better prospects for survival, likely because their coats were more effective at camouflaging them from predators, the study authors reported.

Field biologists often use coat markings as a way of identifying individual animals in the wild, but this study is the first to examine complex coat markings as unique traits that might affect the animal's chances for survival, Lee said.

"My hope is that other scientists will use the same tools to measure mammal coat patterns to advance our understanding of what these patterns mean," he said.

Wild giraffe mothers will only nurse their own calves, so the researchers were able to identify mother-calf relationships based on who was suckling whom. But only genetic testing could reveal which male giraffes sired the calves, so it remains to be seen how much the father contributes genetically to spot traits in giraffe babies, Lee said.

The findings were published online Oct. 2 in the journal PeerJ.