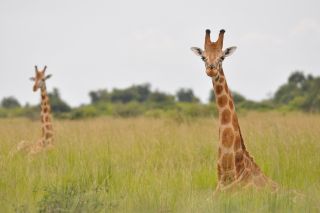 When it comes to giraffes, can you spot the difference? A new study reveals there's more to the animals' species diversity than once suspected.

The study researchers collected and analyzed DNA from skin samples representing 190 giraffes from across Africa, the first such analysis to include data from all nine formerly accepted subspecies.

The results showed that what was long thought to be one giraffe species is in fact four species. [All in the Family: Giraffes Are 4 Species (Photos)]

The 18th-century naturalist Carolus Linnaeus provided the first scientific description of a giraffe in "Systema Naturae" in 1758, using a Nubian giraffe — one of the now-defunct subspecies — as a model. However, Linnaeus had never actually seen a living giraffe, and described it based on reports that were 200 years old, according to the authors of the new study.

Over time, more giraffe subspecies were identified. The nine recognized subspecies were described between 1758 and 1911, and inhabited 12 African countries, including South Sudan, Ethiopia, Kenya, Somalia, Uganda, South Africa and Zimbabwe.

Subspecies designation was based on differences such as the shapes of the ossicones — the animals' knobby "horns" — along with variation in patterns on the giraffes' coats and differences in where they lived. But these distinctions were unreliable, the study authors wrote. Giraffes haven't been studied as closely as other large African mammals such as lions, elephants and gorillas, the researchers explained in a statement, and much about the long-necked animals remains unknown.

Giraffe's genetic complexity in particular has been "underestimated," the scientists said in the study, and greater attention was required to define giraffes' relationships and diversity.

The nine subspecies were absorbed into these four newly defined species, with the Nubian giraffe — the first representative, from more than 300 years ago — now identified as a subspecies of northern giraffe.

Recognizing four distinct giraffe species should be a game changer for conservation plans, the researchers said in the study.

Fewer than 100,000 giraffes remain in the wild, down from an estimated 150,000 that roamed the savannas 30 years ago. And because the species don't interbreed, population numbers for all African giraffes won't accurately represent whether each group is doing well. Using this new information about giraffe genetics, governments and biologists can create more focused efforts to ensure that all four species will be neck and neck in their race toward future success, the scientists said.

The findings were published online today (Sept. 8) in the journal Current Biology.