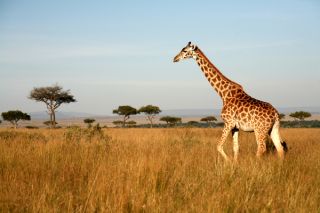 Giraffes tower over Africa's plains. These tall animals are identified by their long necks, equally long and spindly legs, and spotted coats. Most giraffes have a tan, white or yellow coats that are spotted with brown, square shapes.

Giraffes are the tallest living animals in the world, according to the Smithsonian National Zoological Park. A giraffe's neck alone is 6 feet (1.8 meters) long and weighs about 600 lbs. (272 kilograms). The animal's legs are also 6 feet long.

With such a massive body, it makes sense that the giraffes' organs and other body parts are equally huge. Their tongues are a substantial 21 inches (53 centimeters) long, and their feet are 12 inches (30.5 cm) across. According to the San Diego Zoo, a giraffe's heart is 2 feet (0.6 m) long and weighs about 25 lbs. (11 kg). Their lungs can hold 12 gallons (55 liters) of air. In comparison, the average total lung capacity for a human is 1.59 gallons (6 liters).

Giraffes live in savannas throughout Africa. They like semi-arid, open woodlands that have scattered trees and bushes, making the savannas perfect for these animals.

Giraffes are so social that they don't have territories. A group of giraffes is aptly called a tower, according to the U.S. Geological Survey. Towers typically have 10 to 20 members. Who lives in the tower can vary. Some towers consist of all females and their young, or all male or mixed genders. Member are free to come and go as they please, according to the Animal Diversity Web.

Giraffes only sleep around 20 minutes or less per day, according to PBS Nature. Staying awake most of the time allows them to be constantly on alert for predators. They usually get their sleep in quick power naps that last just a couple of minutes.

Every giraffe has two hair-covered horns called ossicones. Male giraffes use their horns to playfully fight with one another. They also spar by swinging their heads at one another and entwining their necks, which is called "necking." [Images: Animals' Dazzling Headgear]

Giraffes are herbivores, which means they eat only plants. Their long necks allow them to reach leaves, seeds, fruits, buds and branches high up in mimosa and acacia trees. They can eat hundreds of pounds of leaves per week, according to National Geographic.

Though these animals eat a lot, giraffes can go without drinking for weeks at a time. They get most of their moisture from the vegetation they eat.

As in cattle, female giraffes are called cows, while the males are called bulls. After mating, the cow will have a gestation period of around 14 months. Baby giraffes are called calves. During birth, the calf will drop to the ground, since mother giraffes give birth standing up. The fall can be as far as 5 feet (1.5 m), according to National Geographic.

Giraffe mothers often take turns watching over the calves. Sometimes, though, the mother giraffe will leave the calf by itself. When this happens, the infant will lie down and wait for its mother to return.

Calves are weaned at around 12 months, according to the University of Michigan. At 3 to 6 years old, calves are fully mature. The animals can live 10 to 15 years in the wild and 20 to 25 years in captivity.

In the Giraffidae family, there are two genera: Giraffa and Okapia. The okapi is sometimes called the forest giraffe. The Giraffa genus has recently had a shake-up after a recent study recognized four species, not just one.

The 2016 study was published in the journal Current Biology. Researchers from the Giraffe Conservation Foundation (GCF) collected and analyzed DNA from skin samples representing 190 giraffes from across Africa, the first such analysis to include data from all nine formerly accepted subspecies. [Related: 1 Long Neck, 4 Species: New Giraffe Diversity Revealed]

The new taxonomy of giraffes, according to the GCF, is:

Recognizing four distinct giraffe species should be a game changer for conservation plans, the GCF researchers said in the study.

Fewer than 100,000 giraffes remain in the wild, down from an estimated 150,000 that roamed the savannas 30 years ago. And because the species don't interbreed, population numbers for all African giraffes won't accurately represent whether each group is doing well. Using this new information about giraffe genetics, governments and biologists can create more focused efforts to ensure that all four species will be neck and neck in their race toward future success, the scientists said.

Giraffe populations are challenged because of poaching and shrinking habitat. The animals' tails are made into good-luck bracelets, fly whisks and thread for stringing beads, according to the African Wildlife Foundation. As agricultural settlement expands, the giraffe's main source of food, the acacia tree, is being cut down.

Just like human fingerprints and zebra stripes, the coat pattern of a giraffe is unique to that animal.

The pattern and the small hump on a giraffe's back are similar to those of a leopard. Years ago, many people thought the giraffe was a combination of a camel and a leopard, and they called these animals "camel-leopards."

You will often see giraffes walking around with birds on their backs. These birds are called tickbirds, or oxpecker birds (Buphagus africanus). They eat bugs that live in the giraffe's coat and alert the animals to danger by chirping loudly.

Even if you spent a lot of time with giraffes, you would never hear them make a noise. This is because giraffes communicate using noises that are too low for humans to hear, according to PBS Nature.

Thanks to their long legs, giraffes are very fast. They can run 35 mph (56 km/h) in short bursts and run for longer stretches at 10 mph (16 km/h), according to National Geographic.

Giraffes are even-toed ungulates, which means they have two weight-bearing hooves on each foot, and are in the order Artiodactyla, which also includes antelopes, cattle, goats, sheep, caribou, moose, hippos and pigs.