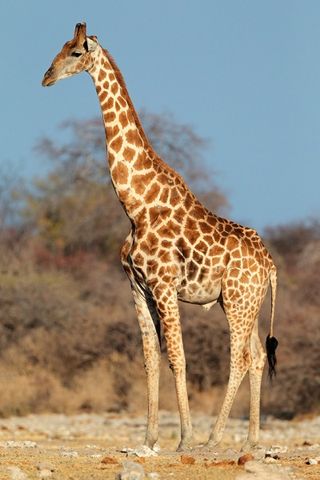 A giraffe's skinny legs look like they could collapse at any second under the animal's immense weight.

But new research has revealed what makes their stems sturdy enough to support a 2,200-lb. (1,000 kilograms) body. Besides having elongated leg bones, giraffes are equipped with pieces of connective tissue, called suspensory ligaments, to help hold them up.

Relying on a suspensory ligament — which is made of elastic tissue, not muscle — allows giraffes to conserve energy: They don't have to engage as much muscle to support their weight. The researchers also think the ligament prevents the foot joints from overextending and collapsing. [In Photos: See Cute Pics of Baby Giraffes]

To test giraffe legs' strength, the researchers used donated limbs from giraffes that died in captivity in European zoos or were euthanized for reasons unrelated to the research. The legs were set into a frame, and a hydraulic press dropped about 550 lbs. (250 kg) to simulate the body weight that each leg is responsible for holding. All the limbs remained sturdy and upright without the support of any living muscle, and could even support heavier weights without collapsing.

The ligament may provide some insight into how giraffes evolved from small, antelopelike creatures into the huge, long-legged species they are today.

"I'd like to link modern giraffes with fossil specimens, to illustrate the process of evolution," Christ Basu, lead investigator of the study from the Royal Veterinary College, said in a statement. "We hypothesize that the suspensory ligament has allowed giraffes to reach large sizes that they otherwise would not have been able to achieve."

Giraffes are the tallest animals in the world – males can grow up to 18 feet (5.5 meters) tall, and their legs alone stand about 6 feet (1.8 m) high. Their unusually long legs are also one reason giraffes can support so much weight.

In humans, the bones that make up the feet and hands, called metatarsals and metacarpals, are small. But in giraffes, these bones are elongated and actually account for half the length of their legs. The long bones have a groove that links to the suspensory ligament. The same ligament is also present in other large, long-legged animals like horses, but this is the first time it's been studied in giraffes.

The research was presented July 2 at the Society for Experimental Biology meeting in England.