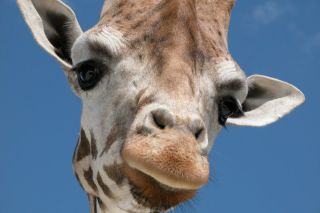 What was thought to be one species of giraffe might actually be several, scientists said today, raising concern that one or more of the species could be on the brink of extinction.

A genetic study suggests there are six or more species in a region of Africa thought to have one.

“Some of these giraffe populations number only a few hundred individuals and need immediate protection,” said study leader David Brown, a geneticist at UCLA and an associate with the Wildlife Conservation Society. “Lumping all giraffes into one species obscures the reality that some kinds of giraffe are on the very brink.”

Classifying current subspecies as fully fledged species would force a re-examination of conservation initiatives in order to deal with the needs of each separate species of giraffe, according to a WCS statement.

Giraffes are the world's tallest animals.

The most threatened potential species:

All giraffes are under threat, the researchers said, with the overall population dropping an estimated 30 percent in the past decade to fewer than 100,000 in all of Africa.

The study is detailed in the latest edition of the journal BMC Biology.