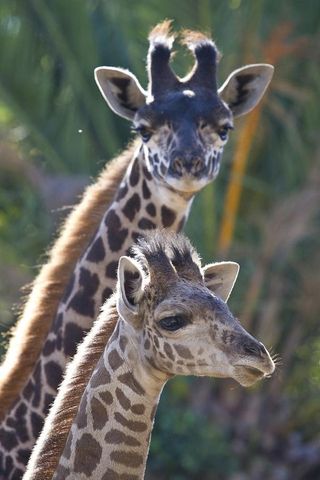 Two of the San Diego Zoo's youngest giraffes were staying close to each other on Monday morning, October 10. The shorter of the giraffes, which also has a lighter-colored coat, was born on August 30 and is the second male calf born to his mother, Nicki. He weighed 162 pounds at birth and weighs in today at 244 pounds.

Keepers report that the unnamed giraffe is curious, confident and bold. Imara, the giraffe with the darker spots was born at the Zoo March of 2011.

A giraffe's spots are light colored when they're born and become darker over time. The herd sire, Silver, has the darkest coloring of all the giraffes at the Zoo.

There is one species of giraffe and nine subspecies, each with its own type of spots. The spots are widely believed to serve as camouflage for the giraffe in its native habitats of Africa. The Zoo is home to Masai giraffes.

When a giraffe is born, it slips to the ground head first, about a 6-foot drop. The fall and the landing don't hurt the calf, but they do cause it to take a big breath. When the calves get older, the mothers leave them together in a "nursery." One of the moms stays and babysits while the others go out to eat. The young giraffes can eat leaves at the age of four months.