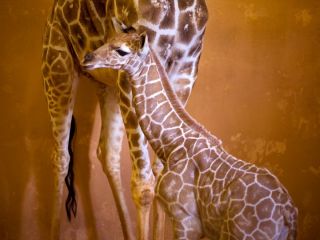 At 6 feet (1.8 meters) tall and weighing in the neighborhood of 125 pounds (56 kilograms), Zoo Atlanta's newest baby is already bigger than many humans, but still has lots of growing to do.

The spindly-legged giraffe calf was born just days ago, in the early hours of Friday morning (July 22) and, like most healthy giraffe calves, could walk within just two hours. This week, keepers learned the calf is a girl.

"We’re delighted about the birth," said Rebecca Snyder, Zoo Atlanta's curator of mammals, in a statement. "Giraffes are among the most popular animals in our collection, and they're a stunning representation of the beauty and diversity of African wildlife."

In addition to bearing the distinction of "world's tallest animal" — males are typically around 18 feet (5 m) tall, females around 16 feet (4.8 m) — giraffes also have one of the animal kingdom's longest gestation periods. Female giraffes are pregnant for roughly 15 months before giving birth.

For now, the zoo's newest giraffe is bonding with its mother, and will stay out of sight until it's ready to join the rest of the herd, according to a zoo statement.

"We're excited about watching this little one grow, not just in feet, but in milestones," Snyder said.