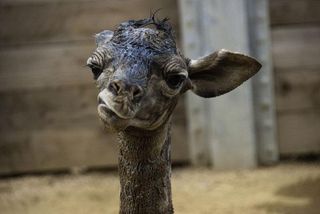 This baby Masai giraffe calf was born at the Houston Zoo on March 4.

The new arrival, a female, is the most recent at the zoo and the first birth in it's African Forest exhibit , which opened on Dec. 10, 2010.

The baby was born to mother Tyra after a 14-month pregnancy.

The calf, who has yet to be named, is Tyra's sixth. The father is 15-year-old Kiva. With this new arrival, the Houston Zoo's herd of Masai giraffe has grown to 8, including 5 males and 3 females.