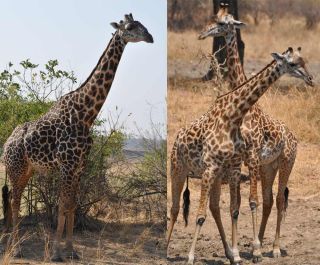 When male giraffes reach about 9.4 years of age, their once light spots (see right) have darkened to coal-black (left), researchers have found.
(Image: © Fred Bercovitch)

Male giraffes become more illustrious with age, but rather than the silvery locks that distinguish the likes of Sean Connery and George Clooney, the hairy blotches on these long-necked mammals darken with age.

And new research suggests the appearance change takes about 1.8 years to complete, with male giraffes being completely covered in coal-black blotches by an average age of 9.4 years.

"What is fascinating about the color change is that it goes from light to dark," study researcher Fred Bercovitch, of the Primate Research Institute & Wildlife Research Center, Kyoto University, told LiveScience. "In gorillas who turn silverback, and in men, the color gets lighter, not darker with age." [Why Does Hair Turn Gray?]

Bercovitch and his colleague, local naturalist Phil Berry, analyzed 33 years of data from observations of the Thornicroft’s giraffe (Giraffa camelopardalis thornicroftii), a distinct subspecies endemic to the Luangwa Valley, Zambia. Data included an average of 10-plus years for each giraffe. Overall, they studied 10 males of known age and 26 whose ages were estimated based on the extent of blotch darkening when first observed.

The researchers paid close attention to the color of the spots, which are known to gradually change color from a sienna brown to a coal black, beginning with a darkening in the center of the blotch that slowly extends outward to the edges. (However, nobody had studied the giraffes long enough to pin down the timing of the change until now.)

Bercovitch thinks testosterone somehow drives this color change, though once the bulls reach maturity, and a full set of jet-black spots, the testosterone probably levels out.

With their data on coat-color changes, along with information on male deaths and disappearances, the researchers put together a life-history profile for the subspecies: Males that survive the first year of life become independent from mom by age 2, and leave their natal area at 4 to 8 years old. Coat color starts changing between ages 7 and 8, with about one to two years elapsing before the change is complete.

Males become mature bulls at about 10 years of age and have an average life expectancy of 14 to 16 years. Maximum longevity is about 21 to 22 years, they found.

Their death, Bercovitch makes clear, likely has nothing to do with the "graying."

"From what we know about mortality among bulls, lions are the main threat, and I suspect that they don't check out the relative blackness of splotches before deciding which male to target," he said.

The study was published online March 8 in the Journal of Zoology.