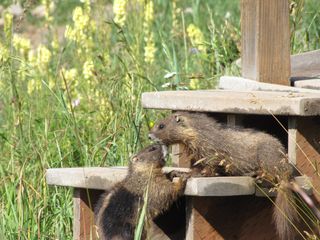 "They explore much more of their environment. In a small area when you explore more you bump against more individuals," study researcher Raquel Monclus, of Universidad Autónoma de Madrid (though the study was done at the University of California, Los Angeles), told LiveScience. "They are the ones initiating the play more often than females from female-biased litters."

Extra testosterone from their brothers in the womb changes the females’ behavior. Eventually this play-fighting gives way to other social behaviors, those more like other females, but they do end up ranging farther from home and having a tougher time reproducing.

The researchers studied 202 female marmots from 82 different litters, when they first emerged from the burrow and when they were a year old. They measured the distance between the marmot's anus and genitals (called the AG distance), which is indicative of sex.

Previous research has shown that these females with longer AG distances come from litters containing more males than females. And since the AG distance indicates testosterone exposure in the womb, the researchers figured the brother's testosterone had changed the female's AG distance; they wondered if it had any effect on the female marmots' behaviors, as well.

In the current study, they watched the female marmots' social behavior, including play-fighting and how far they ventured from the burrows. The masculinized females, those with longer AG distances and more brothers, wandered farther and pursued more play-fighting with more play partners than the more feminine females.

Whether a litter is male- or female-biased is dictated by the environment.

"All any animal wants to do is spread their genes. In some situations it will be by having more sons, and some will be having more females," Monclus said. Male animals traditionally need more investment from their mothers, because they are larger. In some conditions, like when the environment is steady and resources are plenty, it might make sense to invest more in males. "For instance,  when mothers are in good conditions they usually have male-biased litters, whereas in bad body condition they have female-biased litters."

If hormones like testosterone from littermates are impacting marmots' behavior and reproduction, chemical pollutants that have similar structures could screw up these signals.

These pollutants, also known as endocrine disruptors, could interfere with the mothers' intended "decision" to have a female- or male-biased litter. If the wrong choice is made, the marmots' ability to adapt, their fitness in their environment and therefore marmot survival and population productivity, could be affected.

The study was published today (Aug. 30) in the journal Biology Letters.