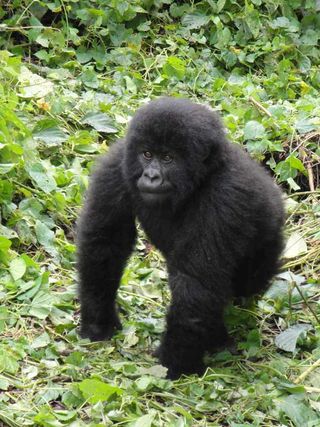 The census counted a total of 480 mountain gorillas in 36 groups, along with 14 solitary silverback males in the Virunga Massif.
(Image: © IGCP)

Endangered gorilla populations are on the rise in a system of national parks in the Democratic Republic of the Congo (DRC), Rwanda and Uganda, according to recent census data.

The analysis of a census conducted in March and April 2010 in the Virunga Massif region confirms a 26.3 percent increase in the population of mountain gorillas (Gorilla beringei beringei) in this area over the last seven years, which translates to a 3.7 percent annual growth rate.

The Virunga Massif is the key habitat for the critically endangered mountain gorillas. The region includes three contiguous national parks spanning the Virunga Volcanoes and straddles the borders of Rwanda, Uganda and the DRC.

The census was made up of six teams, each containing 72 people who systematically walked over 621 miles (1,000 kilometers) throughout the entire range, documenting fresh signs of mountain gorilla groups. In addition, fecal samples were collected and subjected to genetic analysis in order to correct for any double-counting of individuals or groups, ensuring the most accurate estimate for the population.

"This is vivid testimony to the commitment of the Rwanda, Uganda and DRC governments, in addition to their supporting partners including IGCP [International Gorilla Conservation Programme], to ensuring the sustained protection of this charismatic species," said David Greer, African great ape coordinator at the WWF, a conservation group. "The survey results provide us with an excellent demonstration of how strong law enforcement efforts put in place to safeguard flagship species can advance species conservation, benefit local communities, and provide important revenue to governments."

In addition to using the fecal samples to ensure their counts were correct, they will also be used to screen the health of the population. Further details and results of the health screen, population structure, genetic composition, mountain gorilla distribution, population dynamics and human disturbance will be available when the full report is complete in 2011.