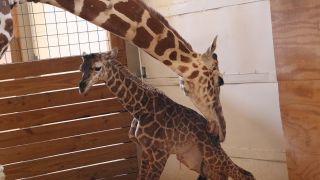 Nearly two months after April the pregnant giraffe made her YouTube debut on Feb. 11, she has finally delivered a healthy calf — a male.

April gave birth to the baby at Animal Adventure Park (AAP) in Harpursville, New York, yesterday (April 15) at 9:53 a.m. local time, attended by AAP caregivers and watched on YouTube and Facebook by a rapt audience that numbered over 1.2 million, according to a statement released by AAP representatives.

The viewers who so avidly followed the birth — not to mention the last weeks of April's pregnancy online — can now delight in the presence of the spindly youngster alongside her in the pen. Barely reaching her shoulder, the young giraffe traipses after his mother, frequently nurses, and peers at the world around him. [Finally! April the Giraffe Delivers Her Newborn]

The first signs of April's active labor appeared around 7:20 a.m. on April 15. "It's happening!" AAP owner Jordan Patch exuberantly announced at 7:29 a.m. in a live video streaming on Facebook. At 7:46 a.m., AAP shared photos showing the baby's hooves emerging. Nearly two hours later, the muzzle was visible, and once the head and neck appeared, the rest of the baby quickly followed, dropping nearly 6 feet to land on the straw-covered floor of the pen.

"His entrance into the world was unnerving to even those of us who have witnessed animal births previously," Patch said in the statement. "Giraffes give birth standing up, which means when the calf is ready to be born, it exits its mother hooves first from 6 feet off the floor, making for a very exciting event!" he added.

To a human, a 6-foot drop may sound like a terrifying ordeal for a newborn. But it is a normal part of the birth process in giraffes, and it helps the little one break out of the enclosing amniotic sac and begin breathing on its own, Laurie Holloway, a spokesperson for the Dallas Zoo, told Live Science in 2011, following the delivery of a giraffe calf at that zoo.

The baby stands 5 feet 9 inches (nearly 2 meters) tall and weighs 129 pounds (58.5 kilograms). He had a full checkup this morning (April 16) and is nursing well, his caregivers reported. April's appetite is also healthy; she is "eating everything in sight" and has made a full recovery, AAP representatives said on Facebook.

Now that the baby giraffe has finally arrived, many of his ardent new fans are asking, "What's his name?" That remains to be seen, as AAP is holding a contest to decide what they're going to call the new baby. Details on submitting name suggestions are available here.