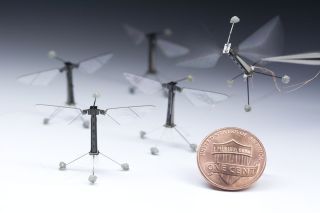 Insect-inspired robots could be used in agriculture and disaster relief efforts.
(Image: © Microrobotics Lab, Harvard John A. Paulson School of Engineering and Applied Sciences and the Wyss Institute for Biologically Inspired Engineering)

Currently, researchers are developing biologically inspired, bee-size flying robots dubbed RoboBees. These devices might one day find use in everything from pollinating crops to locating disaster victims.

Previous research found that robot bees are capable of flying while tethered and moving while submerged in water. However, these machines lack depth perception. This is a major problem, because it means these robots would have a tough time avoiding flying into walls or landing on flowers. [The 6 Strangest Robots Ever Created]

To tackle this challenge, researchers now want to outfit robot bees with a laser-based version of radar. This technology, known as lidar — short for light detection and ranging — emits invisible laser pulses instead of the radio waves used in radar. Sensors measure how long it takes reflected light to travel, which makes it possible to calculate the distance, size and shape of objects. And unlike most lasers, these beams are safe for use around eyes.

"Our technology is very similar to what exists in a Microsoft Kinect that comes with the Xbox for sensing your movements for a game," Karthik Dantu, a computer scientist at the University at Buffalo in New York, told Live Science. "These are extremely safe technologies, similar to ones already used in daily life today."

Lidar is currently helping driverless car prototypes navigate their surroundings. The lidar systems on these vehicles are typically about the size of camping lanterns.

"Essentially, it's the same technology that automakers are using to ensure that driverless cars don't crash into things," Dantu said in a statement. "Only, we need to shrink that technology so it works on robot bees that are no bigger than a penny."

Computer-vision expert Sanjeev Koppal and sensor expert Huikai Xie, both at the University of Florida, will develop the tiny sensor that measures reflected light. Meanwhile, Dantu will create novel perception and navigation algorithms to help RoboBees analyze and map their environments.

"Lidar is basically exploiting the 'echo' of a light pulse," Koppal told Live Science. "You can imagine that the echo of a light pulse that leaves a sensor, bounces off an object and returns is really fast. Detecting this quickly, but without complex circuitry and inside a small form factor, is one of the main challenges."

The micro-lidar device will weigh about two-thousandths of an ounce (56 milligrams), Koppal said. The researchers hope to have working micro-lidar sensors and algorithms in three years, Dantu said. Scientists at Harvard University will incorporate the technology into the RoboBees.

The researchers suggested that micro lidar will not be limited to robot insects in the future. Other applications could involve helping people interact with mobile devices using "natural user interfaces" similar to Microsoft's Kinect, which can detect gestures that people make.

"With micro lidar, you can imagine doing natural user interfaces for wearable technologies like smart clothing and smartwatches," Koppal said.