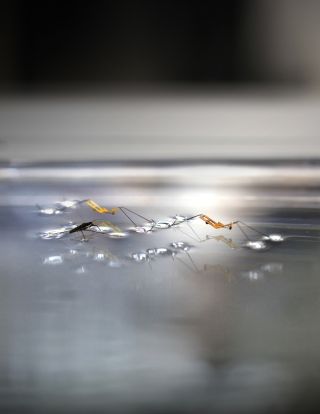 An insect, known as a water strider, next to robots that were inspired by the water-hopping creatures.
(Image: © Seoul National University)

Swarms of robots inspired by water-hopping insects could one day be used for surveillance, search-and-rescue missions and environmental monitoring, researchers say.

More than 1,200 species of animals have evolved the ability to walk on water. These include tiny creatures such as insects and spiders, and larger beasts such as reptiles, birds and even mammals.

Whereas relatively big animals, such as the so-called "Jesus lizard," must slap water with enough force and speed to keep their heavy bodies from going under, insects called water striders are small enough for their weight to be almost entirely supported by the surface tension of water — the same phenomenon that makes water droplets bead up. In 2003, scientists created the first robots that mimic the water strider, which is capable of floating on top of, and skating across, the surface of water. [The 6 Strangest Robots Ever Created]

But until now, one water-strider feat that researchers could not explain or copy was how the insects can jump from the surface of water, leaping just as high off water as they can off solid ground. For instance, water striders collected from streams and ponds in Seoul, South Korea, with bodies a half-inch (1.3 centimeters) long can jump more than 3 inches (8 cm) high on average, co-lead study author Je-Sung Koh, a roboticist at Seoul National University and Harvard University, told Live Science.

Now, scientists have solved the mystery of how these insects accomplish these amazing leaps, and the researchers have built a robot capable of such jumps.

"We have revealed the secret of jumping on water using robotics technology," co-senior study author Kyu-Jin Cho, director of the Biorobotics Laboratory at Seoul National University, told Live Science. "Natural organisms give a lot of inspiration to engineers."

Using high-speed cameras, the researchers analyzed water striders jumping on water. They noticed that the insects' long, superwaterproof legs accelerated gradually, so that the surface of the water did not retreat too quickly and lose contact with the legs. Using a theoretical model of a flexible cylinder floating on top of liquid, the scientists found that the maximum force the water striders' legs exerted was always just below the maximum force that water's surface tension could withstand.

The scientists also found that water striders swept their legs inward to maximize the amount of time they could push against the surface of the water, maximizing the overall force for their leaps. Moreover, the shape of the tips of their legs were curved to adapt to the dimples that formed on the water's surface when the legs pushed downward, thereby maximizing the surface tension the legs experienced.

Next, the scientists developed lightweight robots made of glass-fiber-reinforced composite materials that, in total, weighed only 68 milligrams (0.002 ounces) — a little more than the weight of three adult houseflies. Using a jumping mechanism inspired by fleas, the robot could leap about 5.5 inches (14 cm) off the surface of the water — about the length of its body and 10 times its body's height.

The researchers cautioned that, so far, the robot can jump only once, and it lands randomly. In the far future, the scientists want to build a robot that can not only jump repeatedly and land in a controlled manner, but also carry electronics, sensors and batteries.

"This would be an extremely difficult task, since the weight of the body has to be really lightweight for it to jump on water," Cho said. "It would be great to add a swimming behavior as well."

The scientists detailed their findings in the July 31 issue of the journal Science.