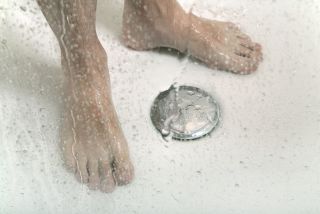 It's a staple of the modern morning routine: Wake up, hop in the shower, lather with soap.

But is that morning scrub-a-dub really necessary?

One man claims not. David Whitlock, a chemical engineer in Boston, has not showered for 12 years.

Whitlock isn't running an experiment in extreme water conservation. Rather, he believes that humans don't need to shower to be healthy, and that a daily soap scrub may actually remove a beneficial type of bacteria that keeps the bacteria that contribute to B.O. in check.

To boost the presence of odor-eating bacteria, Whitlock has designed a bacterial spray called AO+ Mist, which is now sold by the company AoBiome under the brand Mother Dirt. The company hopes this bacterial spritz could reduce the need for products such as soaps and deodorants and potentially even reduce or eliminate the need for showering for those so inclined.

It's true that humans don't need to shower to be healthy, one expert says. However, there's also no evidence that any particular type of bacteria is beneficial to the skin microbiome, he added. [Body Bugs: 5 Surprising Facts About Your Microbiome]

From horses to humans

Whitlock first began his no-showering lifestyle after a friend asked why her horse would roll around in the dirt during the springtime. He wondered whether the horse was somehow coating itself with a beneficial substance in the soil. He came to the conclusion that the horse was coating itself with bacteria species in the Nitrosomonas genus, which is found living on a broad group of vertebrates and invertebrates, he said.

"Lobsters have a very strong biofilm of this bacteria on their skin. Earthworms, freshwater turtles, clams, mussels: Essentially every organism that's in contact with either water or the soil will have these bacteria living on it," Whitlock told Live Science.

Unlike most bacteria found on the human skin, Nitrosomonas bacteria break down ammonia, producing nitrite and nitric oxide (NO), he said. Nitrite is a powerful antibacterial substance. Meanwhile, trillions of receptors for nitric oxide are found in almost every cell in the body, and the substance does everything from relaxing blood vessels to modulating communication between brain cells.

Looking through old research, he found one animal that had no traces of the ammonia-oxidizing Nitrosomonas on its skin: humans. After a bit more digging, he came up with a theory: Perhaps, he speculated, the ubiquitous bacteria played some beneficial role for humans, but the modern lifestyle, with its obsession with hygiene and soap, had removed Nitrosomonas from the skin microbiome. [4 Things That Might or Might Not Exist in the Human Body]

Sweat is mostly water, but it also contains milky, fat-rich substances such as urea, which breaks down into ammonia that can irritate the skin. Bacteria such as Staphylococcus and Propionibacterium acnes also feast on these milky secretions, and produce stinky substances that cause body odor. Nitrosomonas, if it were living naturally on the skin, would then eat the ammonia on the skin while simultaneously keeping other bacteria in check, thereby reducing body odor, Whitlock speculated.

Like most bacteria, however, Nitrosomonas are killed by soap and can be washed off with water. But unlike the stench-producing microbes, Nitrosomonas recolonize the skin very slowly, he said. To grow a healthy coat of Nitrosomonas could take months, he said.

So more than 12 years ago, Whitlock quit showering. (He does still wash his hands to prevent disease transmission.) Because most urban dwellers don't regularly interact with dirt, most people wouldn't have a way to naturally pick up Nitrosomonas, he suspected. Instead, Whitlock began culturing his own bacteria and spritzing it on himself as needed. [See Images of Bacteria That Live in Your Bellybutton]

Whitlock is not smelly, said Jasmina Aganovic, the president of Mother Dirt. (This Live Science reporter has not personally verified this fact.)

Since then, he has been describing his theory to anyone who will listen.

"Five years ago, David was carrying this around in Kirkland water bottles covered with tinfoil, handing out his home-brew," Aganovic said.

Now, he and his company sell the product. While the company doesn't make any health claims about Mother Dirt, Whitlock says that because nitric oxide plays such an important role in the body, it's conceivable that boosting its production via Nitrosomonas could have some health benefits. (The company doesn't suggest that everyone should forgo showering, and has some preliminary data suggesting that water alone may not damage a coat of Nitrosomonas. The company now sells a shower gel for those seeking more conventional hygiene routines, Aganovic said.)

Eventually, the company hopes to answer bigger questions, such as whether the product affects health, or whether the skin microbiome affects inflammatory skin diseases like eczema, Aganovic said.

Until a few centuries ago, people who showered daily might have been considered nuts.

"Although very popular in the Roman times, the bathing culture decreased and even got prohibited in [A.D.] 476: Praying was regarded as more important than bathing to prevent disease," said Chris Callewaert, who researches microbiomes at Ghent University in Belgium and goes by the nickname Dr. Armpit on the website www.drarmpit.com.

Bathing came into vogue around A.D. 1200, but declined again with the rise of diseases such as the plague in the 1500s, Callewaert added.

And, in fact, people don't truly need to shower. The skin is a self-renewing organ that produces all necessary compounds — including immune molecules and bacterial-growth inhibitors — to regulate its bacteria, Callewaert said.

"The skin keeps the bacteria under control and 'cleans' itself," Callewaert told Live Science.

On the other hand, showering does help remove the waste products that cause body odor, so bathing is probably in order for those struggling with their stench, he said.

But the question that is still open is whether ammonia-oxidizing bacteria have any impact on health, he said.

Researchers, reporting in April 2015 in the journal Science Advances, found small amounts of Nitrosomonas bacteria on the skin of people from an uncontacted Amazon tribe called the Yanomami. The study's scientists were actually looking at the existence of antibiotic-resistance genes in the tribe members' microbiome, but the presence of ammonia-oxidizing bacteria does hint that human skin could have been coated with these bugs, and perhaps even fairly recently, Aganovic said.

But though many suspect the skin microbiome could affect health, it's still too early to say which particular types of bacteria are beneficial, Callewaert said.

"Are ammonia-oxidizing bacteria the ones you want on your skin? That is still a question mark. They do not naturally occur on the skin, but maybe they can have other health effects? Scientific proof would help," Callewaert said.