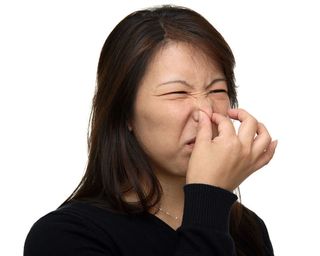 Don't get offended! You could be hyper-hygienic and you'd still ooze odors. Even grosser, bacteria's to blame.

It starts in the sweat glands, which are coiled tubes unique to mammals that release fluids from the blood supply of the dermis layer of skin. Apocrine sweat glands, found in select locations such as the scalp, nipples, genitals and armpits, secrete the viscous substances that invite bacterial growth. (Actual sweat is produced by eccrine glands, which are distributed widely over the body.) The bacteria break down your waste secretions, and it's these hard-working guests that create your special funk.

All that sweating and secreting might be sending signals to others as well. The existence of human pheromones — chemical messengers that convey information between individuals of a species — is still a matter of debate. But a February 2007 study in the Journal of Neuroscience reports that a chemical in male human sweat, when smelled by a woman, raises her level of cortisone (a hormone related to stress levels). This may suggest the presence of pheromones, unless the observed correlation has some underlying cause.