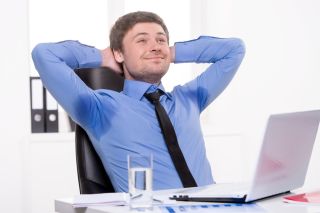 Sweat might feel (and smell) a little gross sometimes, but it plays a critical role in helping your body maintain its proper temperature. However, certain people sweat more than others, and excessive sweating can be an indication of an underlying health condition.

Your body is always sweating, even if you don't notice it. When sweat evaporates, it cools the body, dissipating the heat generated by your metabolism. Visible beads of perspiration only appear on the skin when the output of sweat exceeds the rate of evaporation — something that most often occurs when it's hot and humid, during periods of exercise or as a response to stress. Sweating excessively under these conditions is not uncommon and is usually not indicative of a health problem.

However, some people who experience excessive sweating suffer from a condition known as hyperhidrosis, which causes them to perspire more than is necessary to regulate body temperature. Hyperhidrosis can either be generalized — affecting the entire body — or can be localized to particular parts of the body.

Generalized hyperhidrosis is often a symptom of an underlying health condition, including metabolic disorders (such as hyperthyroidism), diabetes, infections or lymphatic tumors. Excessive sweating can also result from alcohol abuse or withdrawal, or be brought on by certain medications, particularly antidepressants. Changes in hormones brought on by menopause, as well as anxiety, have also been known to cause generalized hyperhidrosis.

Localized hyperhidrosis, on the other hand, is not usually a symptom of other conditions and is believed to stem from minor malfunctions within the nervous system. Also called primary focal hyperhidrosis, the condition — which usually shows up in the palms, armpits or soles of the feet — is also believed to run in families.

Primary focal hyperhidrosis is linked closely to anxiety and usually manifests in childhood or early adulthood. While the condition does not typically cause serious health complications, it can have detrimental effects on the emotional and psychological well-being of those who have it.