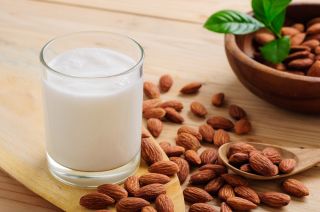 At its most basic, almond milk is a drink made from ground almonds and water. It is a popular plant-based alternative to cow’s milk.

“Almond milk has been around for several years,” said Jenny Heap, a registered dietician with the Almond Board of California. In fact, almond milk has existed since at least the Middle Ages, when noble households favored it over animal milk, according to "Food in Medieval Times" (Greenwood, 2004), by Melitta Weiss Adamson. But, said Heap, almond milk “has gained particular momentum in the past three to five years, appearing now in the cold dairy case as well as in ice cream and frozen novelty products.”

In 2014, almond milk surpassed soymilk as the most popular non-animal milk product, according to the Boston Globe.

It may be called milk and found in the dairy aisle, but almond milk is not dairy. It is “a tasty dairy-free, soy-free lactose-free alternative,” said Heap.

According to Heap, almond milk is made by blending almonds with water and straining them. Sweeteners or salts may then be added. Commercial almond milk manufacturers also usually add vitamins and other nutrient fortifications, as well as thickening agents like carrageenan, a seaweed derivative commonly used as a beverage stabilizer.

It is easy to make almond milk yourself, not to mention cheaper. Heap recommended the following recipe:

How long does almond milk last?

It is unclear exactly how many almonds go into a quart of almond milk, as it depends on the brand or, if it’s homemade, the recipe. But it’s unquestionably a small amount. A carton of the British brand Alpro’s almond milk is only 2 percent almonds. The rest of it is water and added vitamins, minerals and thickening agents. And according to an article by Business Insider, commercial almond milk recipes are pretty similar from brand to brand. The ingredient list on most commercial brands lists almonds as the second or third ingredient, after water and sweeteners, according to the Los Angeles Times.

Therefore, when it comes to eating whole almonds or drinking almond milk, The George Mateljan Foundation’s World’s Healthiest Foods website states that eating almonds provides more nutritional benefits. A comparison of the U.S. Department of Agriculture's nutrient value charts shows that one 8-ounce glass of almond milk contains only 1 gram of protein, compared to 6 grams in a serving of almonds. It also has only 1 gram of fiber, compared to 4 grams in a serving of almonds. Almond milk has 17 grams of magnesium vs. 77 in almonds and 1.5 grams of heart-healthy monounsaturated fats vs. almost 9 in almonds.

Almond milk does contain much larger amounts of calcium and vitamins A and D than whole almonds, but that is because the manufacturers fortify it with those nutrients, according to World’s Healthiest Foods. Additionally, the vitamin E found in almond milk is added; the vitamin E from raw almonds doesn’t make its way into almond milk.

If you make your own almond milk, these nutrient values will likely go up. Heap recommends using one cup of almonds per two cups of water, which would yield milk with a much higher nut percentage than the commercially available options.

It’s no wonder that commercial almond milk has vitamins A and D while raw almonds don’t — manufacturers are trying to make almond milk as cow-like as possible. After all, most people use it as a dairy substitute. So how does milk made from almonds and water stack up against milk from an udder?

One notable difference is that while almond milk is free of cholesterol and saturated fats, cow’s milk contains these to different degrees depending on the type of milk. The Washington Postreported that the fat in almond milk is all healthy, which cannot be said of cow’s milk unless it is skim and has no fat. Also, almond milk generally has fewer calories than cow’s milk, though again that depends on if you’re drinking heavily sweetened almond milk or skim cow’s milk.

Here are the nutrition facts for almond milk, according to the U.S. Food and Drug Administration, which regulates food labeling through the Nutritional Labeling and Education Act:

Depending on the vitamin and mineral fortifications your almond milk includes, there may be other benefits from nutrients like calcium, protein, and vitamins A, D, E and B12.

Since almond milk is dairy-free, it can be a good option for those with dairy or lactose intolerances looking for something to put on their cereal. According to a recent article on plant-based milk substitutes published in Critical Reviews in Food Science and Nutrition, 75 percent of the world’s population suffers from lactose intolerance and may benefit from products like almond milk. It can also be a good option for vegans and vegetarians. The article cautions, however, that consumers must remain aware that dairy alternatives usually do not contain anywhere close to the same amounts of calcium and protein as cow’s milk.

Not only is almond-milk cholesterol free, according to the American Heart Association, monounsaturated fats, such as those found in almond milk, are good for your heart if you substitute them for saturated fats, such as those found in cow’s milk. In a 1999 review published in Current Atherosclerosis Reports, researchers looked at the Nurses’ Health Study and estimated that substituting nuts for saturated fats resulted in a 45 percent estimated reduced risk of heart disease.

Almond milk is popular with dieters. Heap said, “It’s really had strong appeal to calorie-watchers since many varieties have just 30-60 calories per cup.” A study published in 2003 in the International Journal of Obesity and Related Metabolic Disorders suggested that combining almonds with a low-calorie, high-monounsaturated fat diet led to more weight loss than did a low-calorie diet with lots of complex carbohydrates.

Some of the riboflavin in almonds makes it into almond milk. Riboflavin is also known as vitamin B2, and it helps produce red blood cells and release energy from the carbohydrates you eat, according to the National Institutes of Health.

Who should not drink almond milk?

As almond milk rises in popularity, more and more parents are giving it to their infants. Studies have shown that this can be quite dangerous. In a 2014 study in the French journal Archives of Pediatrics, infants who were given plant-based milks between ages 4 and 14 months showed signs of protein-calorie malnutrition, edema, hypoalbuminemia (low blood levels of albumin, an important protein), iron deficiency anemia, low growth rate, vitamin D deficiencies and several other problems. The article recommends statutory measures forbidding plant-based milks for young infants.

Almond milk may not contain a lot of almonds, but it’s enough to set off serious allergy attacks for those with almond allergies. An almond allergy is typically grouped with a tree nut allergy (including cashews, walnuts, Brazil nuts and others), and is usually severe. According to the American College of Allergy, Asthma and Immunology, tree nut allergies are among the allergies most likely to cause anaphylaxis, a severe allergic reaction. Symptoms of an almond allergy include abdominal pain, diarrhea, difficulty swallowing, nasal congestion or a runny nose, nausea, shortness of breath and itching.

Some brands of almond milk contain carrageenan, a common and controversial thickener derived from seaweed. It’s often used for texture in things like ice cream. According to one review published in Environmental Health Perspectives, several studies have linked it to increased inflammation as well as inflammatory bowel disease and colorectal malignancy. If you’re concerned about carrageenan, check the labels on your almond milk to select a brand that does not include it.

Given almond milk’s low protein content, and, if unfortified, low calcium content, those substituting almond milk for dairy should be careful to get protein and calcium from other sources.