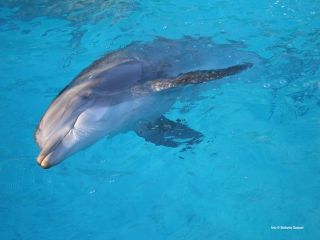 A genetic study found that the Mediterranean is a sea of genetic diversity for bottlenose dolphins.
(Image: © Stefania Gaspari)

When dolphins dive deep below the water's surface, they avoid succumbing to decompression sickness, or "the bends," likely because the massive sea creatures have collapsible lungs, a new study finds. These lungs allow dolphins to inhale and exhale two to three times quicker than humans.

Understanding how dolphins breathe rapidly and maintain lung functionality under immense pressure could help scientists keep humans safe when they are in similarly extreme situations, such as under anesthesia during surgeries, the researchers said.

Unlike humans, dolphins do not need to be strapped to an oxygen tank to achieve their impressive diving feats. This is because dolphins have compressible lungs that help them withstand high pressures deep in the ocean. [Deep Divers: A Gallery of Dolphins]

"The deeper [dolphins] go into the ocean, the smaller the volume of gas or air in the lungs gets," said study lead author Andreas Fahlman, a professor of biology at Texas A&M University in Corpus Christi. Fahlman found that dolphins can replace as much as 95 percent of the air in their lungs in a single breath. For comparison, humans are capable of replacing only as much as 65 percent. Dolphins exhale and then inhale above water before diving back down with lungs filled with air — each breath consumes and releases a certain amount of oxygen that energizes the animals as they swim the ocean.

The researchers studied six male bottlenose dolphins at Dolphin Quest Oahu, a dolphin training facility in Hawaii that is open to the public. The dolphins were free to swim away from the researchers whenever they wished, Fahlman said, though the animals were trained to sit still and breathe into a mask, called a pneumotachometer. This device essentially functioned as a "speedometer for the lungs," Fahlman said. The mask covered the dolphins' blowholes at the backs of their necks.

When trainers had dolphins breathe as hard as they could, in breaths researchers called "chuffs," the animals could inhale 8 gallons (30 liters) of air in one second, and exhale 34 gallons (130 liters) of air per second. A human's strongest exhale moves at a rate of 4 gallons (15 liters) per second, and human coughs range from about 10 to 16 gallons (40 to 60 liters) per second. In other words, dolphins move air two to three times faster than humans could ever do, Fahlman said.

Part of the reason dolphins are expert divers is because they can collapse their alveoli, the little sacks on the lungs that monitor air flow, and then open them up again, "but humans can't do that," Fahlman said.

This has implications for humans who are exposed to similarly extreme conditions, such as patients who undergo emergency operations.

"[I]f you're in the hospital and you're undergoing surgery, oftentimes what they do is put a tube down your throat and put a positive pressure to prevent a [lung] collapse from happening," Fahlman said.

Putting positive pressure on the lungs keeps them open, but can also be dangerous, he added. "This is a clinically relevant issue for people in emergency care, for people undergoing surgery, because we cannot as easily open up the alveoli." [The 10 Most Amazing Animal Abilities]

Fahlman said it's possible that dolphins' lungs look completely different from humans' or that dolphins have a very different biochemical composition in their lungs, which could explain their impressive exhalation abilities. Lungs typically contain a compound called surfactant, or pulmonary surfactant, that helps with breathing. Previous research found that surfactant in some seals and sea lions can keep the alveoli more lubricated so they open up easily.

All mammals use surfactant while breathing; it's a "way of trying to reduce the number of calories that it costs [to] inhale and exhale," Fahlman said, adding that animals developed differences in surfactant to adapt to their environments.

Prematurely born babies benefit from surfactant manufactured from cows, Fahlman said, because the babies can't produce enough of the substance at such a young age.

Surfactant from dolphins and other sea mammals could be beneficial under different circumstances, he added. "We can learn about the structure of the surfactant [that animals] have and replicate it for humans," Fahlman said.

Looking to the future

Studying animal breathing rhythms and capacities can also help scientists better understand respiratory disease in marine animals, which is a major cause of morbidity and mortality among marine animals in the wild and under human care, Fahlman said.

Humans are exposed to pollen, debris and other airborne pollutants that many dolphins and other mammals are unable to remove from their blowholes. This can make some animals susceptible to certain diseases like lung disease.

Fahlman said he plans to expand his research to beluga whales and porpoises to investigate their breathing patterns. He said there is especially high concern around mammals living in waters near oil rigs. Researchers are planning to travel to Alaska and the Arctic to study the mammals before oil reserves there are exploited, to establish a baseline for animal health, he added.

Oil spills, like the 2010 Deepwater Horizon catastrophe in the Gulf of Mexico, can severely hurt dolphins' health, though the direct effects of the oil spill can be hard to measure without knowing the animals' health prior to the spill.

The study was published July 8 in The Journal of Experimental Biology.