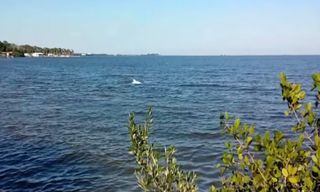 The fin of an albino bottlenose dolphin swimming along the east coast of Central Florida.
(Image: © Danielle Carter (Screenshot by Live Science))

An albino bottlenose dolphin, recently spotted off the east coast of Florida, was caught on video flashing its white dorsal fin above the water's blue waves.

The rare white dolphin is the star of an amateur video filmed by Danielle Carter, a volunteer with the Florida Fish and Wildlife Conservation Commission. Carter took the video when she unexpectedly noticed the bottlenose dolphin (Tursiops truncatus) swimming along the Indian River in Central Florida on Dec. 10.

The footage shows the white dolphin swimming in shallow water near the shore, a strategic place to catch fish such as sea trout, pinfish or mullet, said Blair Mase, the Southeast region marine mammal stranding coordinator with the National Oceanic and Atmospheric Administration (NOAA). [The Pink and White Album: Amazing Albino Animals]

"A lot of times when they act that way, they are herding fish into the shallows [to feed]" Mase told Live Science.

The video only provides several glimpses of the dolphin, but the animal looks like a healthy subadult, meaning it's likely a few years old, Mase said. In spite of the dolphin's white body, it's difficult to say whether the animal is a true albino, Mase added.

In addition to white or fair skin and hair, other telltale signs of albinism include pink or red eyes and impaired vision. Albinism in marine creatures is rare, and most of scientists' knowledge of the condition comes from human studies, Mase said. People with the genetic predisposition lack the melanin pigment, usually because they inherited recessive genes from both of their parents, or in rare cases, from just one parent.

For animals in the wild, albinism can cause problems, Mase said. Albinos are also particularly sensitive to the sun and sunburns, and their white skin can make it hard to camouflage themselves against predators, she said.

The condition has been observed in 20 species of whales, dolphins and porpoises. But NOAA has recorded just 14 previous sightings of albino bottlenose dolphins since the agency started counting such individuals in 1962, Mase said.

"These are animals that we see along our coastline in our estuaries, and to hear about one that's albino is quite unique," Mase said. "But it does attract a lot of attention, and that is one of our concerns."

She encouraged people to be mindful of the dolphin's privacy, so as not to cause the animal unnecessary stress. The Marine Mammal Protection Act of 1972 protects bottlenose dolphins, and NOAA advises that people stay at least 50 yards away (46 meters) from the animals, and spend no more than 30 minutes viewing them.

Neither should marine enthusiasts feed wild dolphins, NOAA said. In recent years, a large number of bottlenose dolphins have died on the East Coast of the United States, likely from a virus, making each dolphin life all the more valuable, Mase said.

Since the December sighting, several other people have reported seeing the albino dolphin, said Brandon Basino, a spokesman with the Florida Fish and Wildlife Research Institute.

Bottlenose dolphins typically swim together in pods, but some pods migrate and others do not.

"This could be a transient animal coming in from somewhere else, just hanging around for a little bit, or it could be a resident," Mase said. "My hunch is that it's a transient animal from another area, just because Indian [River] Lagoon is so well studied, and we hadn't had a report of this animal prior to these reports."

Other albino bottlenose dolphin sightings include a 1994 spotting of a dolphin swimming with four or five other dolphins in Little Lake, near New Orleans. But, the dolphin was only seen for 20 to 30 minutes, and then it was never seen again. People saw another white dolphin calf in a group of about 40 dolphins south of Galveston, Texas, in September 2003, and it was seen several times again through August 2004.