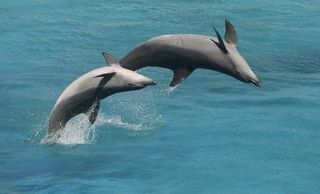 When meeting strangers in the wild, dolphins whistle signature tunes that may be the animal equivalent of "Hello, my name is…" stickers.

These signature whistles have been observed in captive dolphins for decades, but new research is the first to reveal how these sea mammals use the sounds when one pod meets another in the ocean.

"It's not just 'I'm so-and-so,' but the other information also in that whistle is, 'I'm so-and-so, and I'm interested in making contact in a friendly way, I'm not attacking,'" said study researcher Vincent Janik, an expert in animal communication at the University of St. Andrews in Scotland.

Janik and his colleagues used special arrays of underwater microphones to follow bottlenose dolphin pods in St. Andrews Bay as they swam around and interacted with other groups of dolphins. They used a statistical method to tease out patterns in signature whistles (those whistles that dolphins develop as their personalized calling card) and differentiate those noises from the other chirps and squeaks dolphins produce. [Deep Divers: A Gallery of Dolphins]

In cases where dolphin pods joined and swam together, the researchers found, such meetings were preceded by one dolphin in the group producing a signature whistle and another dolphin in the second group answering. When dolphin groups swam by one another and didn't join, these meet-and-greet whistles were absent.

The "greeting ritual" may not require every group member to introduce themselves, because dolphins can use echolocation to determine the size of the other group, Janik told LiveScience. He and his colleagues weren't able to pinpoint which dolphin individuals made the signature whistles, so they don't know if each dolphin pod has a designated social chairman or if any dolphin can pipe up and propose a get-together. It's likely that there is no designated leader, Janik said, as dolphin groups tend to be fluid and lack a stable commander-in-chief.

"I think it's whoever is interested in saying hi," Janik said.

The dolphin calls are important because dolphins are one of the few animals that makeup new sounds, Janik said. Social primates know each other from the sounds of their voices, but they don't create signature identification calls. Dolphins, on the other hand, start developing their own whistles at just a few months of age. They're also verbally adept, capable of mimicking the songs of other animals and even using particular sounds to refer to specific objects in captivity, almost as if they're using words.

"What I found really rewarding is to be out there and see how they communicate amongst themselves," Janik said. "These are wild groups that are just doing whatever they're doing. It's really the first time that we can pinpoint down two individual groups and how they interact in a vocal domain, which is really cool."

Janik and his colleagues are now studying how the dolphins develop their personalized whistles. They're also investigating the hypothesis that the whistles act as a dolphin's name by recording wild dolphins' signature whistles and playing them back to the animals.

"If I copy a signature whistle of an animal, does the animal react?" Janik said. "Is it actually possible to address someone by copying the whistle?"