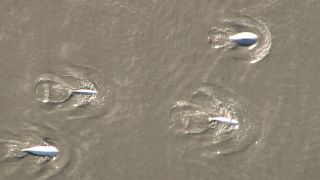 A rare group of beluga whales in Alaska saw a slight increase in numbers last year, a survey showed. Scientists estimated that the population of Cook Inlet belugas stood at 312 in 2012, compared with a record low 278 in 2011, officials with the National Oceanic and Atmospheric Administration (NOAA) announced.

This small uptick is not scientifically significant, researchers noted. Long-term trends have shown Cook Inlet beluga whales in decline over the past two decades. According to NOAA estimates, the population may once have been as big as 1,300 but it shrank dramatically during the 1990s and has continued to fall.

The whales' home, Cook Inlet, stretches some 180 miles (290 km) from the Gulf of Alaska to Anchorage. Scientists conducting the 2012 survey were surprised to see a group of the endangered population swimming just offshore of West Foreland swimming north into upper part of the inlet.

"Beluga whales have not been observed in this area during our surveys since 2001," Kim Shelden, a NOAA scientist on the survey, said in a statement.

"This group of 12 to 21 whales then moved into Trading Bay where they remained for the duration of the survey, not far from the mouth of the McArthur River. Groups of this size have not been seen during our beluga whale surveys south of North Foreland since 1995."