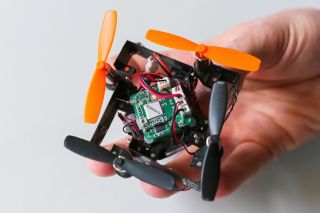 Swarms of these tiny drones could be deployed over disaster zones to help look for survivors, researchers say.
(Image: © Alain Herzog, EPFL)

A compact, foldable drone inspired by origami can unfold itself automatically and take flight within a fraction of a second.

Hordes of these quadcopters, which are about the size of an outstretched palm, could be released over a disaster zone to take photographs and make contact with survivors, researchers say.

This drone not only fits inside your pocket, it can also self-deploy in half a second, said Dr. Stefano Mintchev, a professor of bio-inspired robotics at the École Polytechnique Fédérale de Lausanne, in Switzerland. "You can take it out of the box, switch on the motor, and it's ready to fly," Floreano told Live Science. [See video of foldable drone in action]

When the device is not in use, the arms — which are made of Fiberglass and light yet rigid polyester — fold up into a trapezoid. When switched on, the force of the propellers causes the arms to unfold horizontally. Then, magnets keep the arms locked into position.

In order for the drone to remain stable during flight, two of the propellers (diagonally across from each other) need to spin in the opposite direction from the other two, the researchers said. The propellers all spin the same direction while the drone unfolds, but a sensor detects when the arms have locked into position, and within 50 milliseconds, the direction of two of the rotors is reversed, so the drone is ready to take off.

The design is simple, but reliable, the researchers said. The stiffness of the arms ensures that they won't bend or vibrate during flight, which could make the drone unstable or less responsive to control, and their horizontal movement avoids any imbalances due to gravity. The arms' Fiberglass and polyester material keeps the device lightweight.

This version of the drone must still be folded by hand, but it takes less than 10 seconds for someone with practice, the researchers said. The team is now planning to create a version that folds up automatically.

In addition, future designs will be lighter, which will allow for larger models, and the arms will be strong enough to survive crashes. The same origami principles could be generalized to any type of flying vehicle with wings or with protective cages, the researchers said.

The prototype has been patented, and will be demonstrated May 25 at a robotics conference in Seattle.