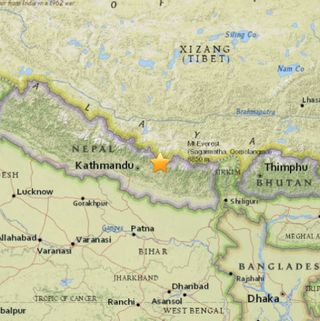 A 7.3-magnitude earthquake struck Nepal this morning (May 12), toppling buildings and killing at least a dozen people.

The temblor was centered 11 miles (18 kilometers) southeast of Kodari, Nepal, and 47 miles (76 km) east-northeast of the Nepalese capital of Kathmandu. This was the largest aftershock yet of the April 25 temblor, a magnitude-7.8 earthquake (called the Gorkha earthquake) located about 90 miles (150 km) to the west of this aftershock, according to the U.S. Geological Survey.

The May 12 earthquake occurred due to faulting associated with the Main Himalayan Thrust, where the India plate is slamming into the Eurasia plate to the north. This area has a history of powerful earthquakes: Before the April 25 temblor, four magnitude-6 or larger earthquakes within 155 miles (250 km) of this area in the past century, according to the USGS. One such event, a magnitude-6.9 quake killed nearly 1,500 people in August 1988. The largest of these, a magnitude-8.0 earthquake known as the 1934 Nepal-Bihar earthquake, ruptured a large part of the fault to the south of the May 12 quake and caused around 10,600 fatalities, the USGS reported.

Like the April 25 earthquake, this one was relatively shallow, occurring just 9.3 miles (15 km) belowground; the shallower a quake the more shaking at the surface, geologists say.

Earth scientists had anticipated major aftershocks and even larger earthquakes in the area. In fact, a recent study found that smaller aftershocks strike within the main earthquake rupture, whereas the biggest aftershocks tend to strike at the edge of where the original earthquake occurred. And that was the case for this one, which hit on the eastern edge of the April 25 rupture zone.