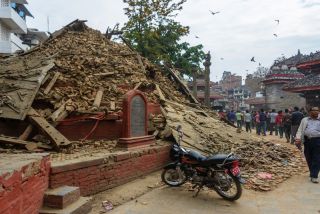 Large aftershocks not only rattle nerves, they also can cause new destruction and injuries by further damaging structures hit by the initial earthquake. While there was no way to predict the deadly magnitude-7.8 earthquake that rocked Nepal on April 25, scientists are developing ways to forecast where the worst aftershocks will hit. A new study finds that the biggest aftershocks tend to strike at the edge of the original earthquake.

"We're very concerned about large aftershocks," said study author Nicholas van der Elst, a seismologist with the U.S. Geological Survey (USGS). "We really want to know where to expect that magnitude 6 if it's in a major metropolitan area." [Nepal Earthquake Photos: Odd Effects of Kathmandu Temblor]

The largest aftershock so far in Nepal was measured at magnitude 6.7.

By analyzing thousands of quake records, Van der Elst has shown that location is as important as earthquake size in forecasting large aftershocks. The study is part of a major effort on the part of some scientists to develop short-term earthquake forecasts for the public. The findings were presented last week at the annual meeting of the Seismological Society of America in Pasadena, California.

Aftershocks, by definition, are smaller than the main earthquake and must occur within one fault-rupture length of the initial shock. The fault rupture is the area of the fault that is torn apart during the earthquake.

Van der Elst's analysis could boost the accuracy of aftershock forecasts by adding a location to the size estimates. He found that smaller aftershocks tend to strike within the main earthquake rupture, on sticky bits of the fault that did not break during the original earthquake. This limits the earthquake size, because there is not much left to rupture, he said.

Van der Elst said larger aftershocks start at the edge of the earthquake tear, where the quakes can break new ground on unbroken fault areas. (Aftershocks can also strike off the fault entirely, as the surrounding rock adjusts to its new position.)

"A really big earthquake ruptures a fresh patch of the fault," Van der Elst told Live Science. "If you want to grow a large aftershock, it needs to grow outside the main shock rupture."

While the results make intuitive sense, demonstrating that nature follows these statistical patterns is the first step toward including aftershock location in official forecasts. "If you actually know where those larger earthquakes were likely to occur, it would help you plan your emergency response," Van der Elst said.

A forecast model that includes location statistics would likely be useful in places such as California, where public agencies must rapidly respond to the threat of aftershocks, said Ned Field, a USGS research scientist in Golden, Colorado, who was not involved in the study. "If you're a utility company trying to decide what to do, these details can matter," he told Live Science.

To make matters more complicated, there are some special cases involving aftershocks. Occasionally an aftershock is larger than the initial earthquake. In this case, geologists rename the first earthquake, calling it a foreshock, and the aftershock becomes the primary earthquake. Also, there are usually other faults nearby that have built up strain over the years. A nearby earthquake may push these faults over the edge. These events are not considered aftershocks, however, because the added stress from the earthquake was just the tipping point that triggered the fault to release its pent-up energy, resulting in a new earthquake.