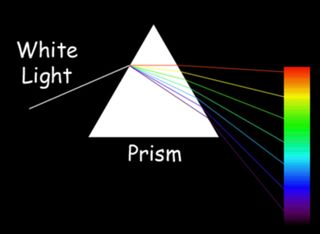 A prism can break white light up into the visible light spectrum.
(Image: © NASA)

EM radiation is transmitted in waves or particles at different wavelengths and frequencies. This broad range of wavelengths is known as the electromagnetic spectrum. That spectrum is typically divided into seven regions in order of decreasing wavelength and increasing energy and frequency. The common designations are radio waves, microwaves, infrared (IR), visible light, ultraviolet (UV), X-rays and gamma-rays.

Perhaps the most important characteristic of visible light is color. Color is both an inherent property of light and an artifact of the human eye. Objects don't "have" color, according to Glenn Elert, author of the website The Physics Hypertextbook. Rather, they give off light that "appears" to be a color. In other words, Elert writes, color exists only in the mind of the beholder.

For instance, yellow contains both red and green; cyan is a mixture of green and blue, and magenta is blend of red and blue. White light contains all colors in combination. Black is a total absence of light. The first person to realize that white light was made up of the colors of the rainbow was Isaac Newton, who in 1666 passed sunlight through a narrow slit and then a prism to project the colored spectrum onto a wall, according to Michael Fowler, a physics professor at the University of Virginia.

As objects grow hotter, they radiate energy dominated by shorter wavelengths, which we perceive as changing colors, according to NASA. For example, the flame of a blowtorch changes from reddish to blue as it is adjusted to burn hotter. This process of turning heat energy into light energy is called incandescence, according to the Institute for Dynamic Educational Advancement's website, WebExhibits.org.

Incandescent light is produced when hot matter releases a portion of its thermal vibration energy as photons. At about 800 degrees Celsius (1,472 degrees Fahrenheit), the energy radiated by an object reaches the infrared. As the temperature increases, the energy moves into the visible spectrum and the object appears to have a reddish glow. As the object gets hotter, the color changes to "white hot" and eventually to blue.

The color of hot objects, such as stars, can be used to estimate their temperatures, according to IDEA. For example, the sun's surface temperature is about 5,800 Kelvin (9,980 F or 5,527 C). The light emitted has a peak wavelength of about 550 nm, which we perceive as visible white light (or slightly yellowish).