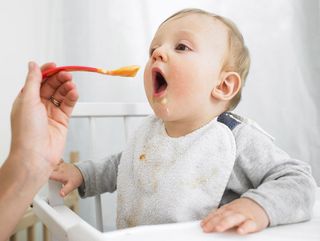 PHILADELPHIA — Infants who start eating solid foods later than usual may be at increased risk for a type of blood cancer, a new study suggests.

Researchers analyzed information from 172 children in Texas who had been diagnosed with acute lymphocytic leukemia (ALL) — a cancer of the white blood cells — and 344 healthy children around the same age. The study included children who were fed breast milk, infant formula or both before they started eating solid foods.

The findings agree with an earlier study conducted by the same group of researchers that found that for every one-month delay in the start of solid foods, a child's likelihood of developing ALL increased by 14 percent.

The researchers also found that children who were fed formula for a longer time, regardless of when solid foods were introduced, also had an increased risk of ALL.

ALL is the most common type of childhood cancer. Even so, like other cancers in children, the disease is rare, so a child's overall risk of developing the disease is small, said study researcher Jeremy Schraw, a doctoral student in nutritional science at the University of Texas at Austin. About 4 in 100,000 U.S. children develop ALL yearly, according to the National Cancer Institute. [10 Ways to Promote Kids' Healthy Eating Habits]

Still, he said, "I think that infant feeding exposures are important because they're universal — all infants are going to be fed. And they're modifiable, so we can change the way that infants are fed, according to our knowledge and best practices,"

It's still too early to make recommendations on when infants should start solid foods based on the new findings, Schraw said. But the results are generally in line with what is already recommended; the American Academy of Pediatrics recommends that infants be exclusively breastfed for the first six months of life, and start solid foods around age 6 months.

Because the new study involved only children in Texas, larger studies of different populations are needed to confirm the findings, Schraw said.

The study only found an association, and does not show a cause-and-effect relationship between delaying the introduction of solid foods and developing ALL. It could be that children who start solid foods later tend to have poorer health overall, which might explain the link.

But Schraw said it's also possible that later introduction to solid foods might affect a baby's immune system. For example, eating solid food can affect the gut bacteria, which in turn stimulates the immune system.

"Delaying introduction of solids might delay immune challenges to a child, and interfere with the normal development of the immune system, thereby increasing their risk" of ALL, Schraw said.

In fact, in an early analysis of the data, Schraw found that among children who had older siblings — who tend to bring all sorts of germs into the house — the link between starting solid foods later in life and ALL risk disappeared.

"These children with an older sibling are more likely to get their immune exposures elsewhere, and it seems like solid foods are less important," Schraw said.

The researchers want to continue to examine the link between introducing solid foods and ALL risk, and take into account different factors, such as the type of food children are eating.

The new study has not been yet been published in a peer-reviewed journal.