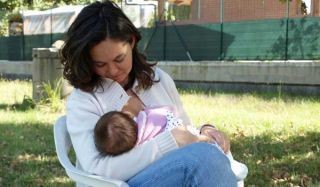 The percentage of babies who are breast-fed in the United States continues to rise, according to new estimates from the Centers for Disease Control and Prevention.

Between 2000 and 2010, the percentage of mothers who said they breast-fed their babies in the early postpartum period increased from 71 percent to nearly 77 percent, according to the report.

"This is great news for the health of our nation because babies who are breastfed have lower risks of ear and gastrointestinal infections, diabetes and obesity, and mothers who breastfeed have lower risks of breast and ovarian cancers," Dr. Tom Frieden, director of the CDC, said in a statement. "It is critical that we continue working to improve hospital, community and workplace support for breastfeeding mothers and babies," Frieden said.

The American Academy of Pediatrics recommends exclusively breast-feeding infants for six months, in addition to giving the baby doctor-recommended supplements to ensure that the child gets vital vitamins and minerals not found in high quantities in breast milk. After that, women should continue to breast-feed their baby until the first birthday, in addition to feeding him or her other foods, the AAP says.

"The period right after a baby is born is a critical time for establishing breastfeeding," Janet L. Collins, director of CDC’s Division of Nutrition, Physical Activity, and Obesity, said in a statement. Allowing babies to stay in the same room as their mothers and have skin-to-skin contact "help ensure that mothers and babies stay together and are able to start and continue breastfeeding. These are meaningful steps hospitals can take to support mothers and families and help improve breastfeeding rates," Collins said.

Earlier this year, the CDC released a report about rising breast-feeding rates, but the most recent data in that study was from 2008.