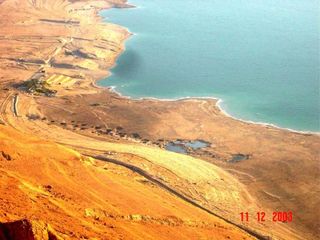 For millennia, the salty, mineral-rich waters of the Dead Sea have drawn visitors and health pilgrims to its shores. But in recent years, gaping chasms have been opening up without warning along its banks, posing a threat to such visitors and tourism in general.

Nestled between Israel and the Palestinian territories to the west, and Jordan to the east, the Dead Sea is famous for is extreme salinity (34 percent salt, almost 10 times as salty as the ocean), and for having the lowest elevation on Earth, at 1,407 feet (429 meters) below sea level.

But for the past few decades, the sea has been shrinking rapidly, due to the diversion of water from the Jordan River (which feeds the Dead Sea) and mineral mining from its waters in the south. The water's surface is currently receding by about 3 feet (1 m) per year, according to Hanan Ginat, a geologist at the Dead Sea and Arava Research Center, which runs under the auspices of Israel's Ben-Gurion University of the Negev. [See Photos of the Dead Sea Sinkholes]

As the briny water recedes, fresh groundwater wells up and dissolves layers of salt, creating large underground cavities, above which sinkholes form. The holes can open up without warning, Ginat told Live Science. "We're looking for systems to forecast where they will happen, but it's very complicated," he added.

The main reason for the Dead Sea's decline is diversion of water from the Jordan River, which used to provide about 450 billion gallons (1.7 billion cubic meters), but now only provides about 20 percent of that, Ginat said. A factory called Dead Sea Works, which pumps out seawater to harvest its salts and minerals, plays a role in the problem, he said.

Ginat's colleague at Dead Sea and Arava Research Center, geologist Eli Raz, has studied the sinkhole problem in depth. Raz found that many of the craters developed along seismic fault lines in the Jordan Rift Valley. Inside these faults, the dissolved salts are less stable and more susceptible to invading freshwater, which hollows out the gaping holes, Raz's studies suggest.

The sinkholes were first noticed in the 1970s, but have been forming more rapidly in recent years. The holes are dangerous for people who visit or live in the area, and while no one has been killed, the problem should be taken seriously, researchers warn. The sinkholes can reach up to 82 feet (25 m) deep and 131 feet (40 m) in diameter, and nearby holes sometimes join to form giant ones, according to Raz and his colleagues. More than 4,000 sinkholes exist today, mostly on the sea's western shores, Ginat said.

However, there may be a way to stave off the Dead Sea's decline. Authorities have proposed a canal that would run from the Red Sea to the Dead Sea, called the Red Sea-Dead Sea Conduit, which, in addition to providing water to Jordan, Israel and the Palestinian territories, would bring salt water to the Dead Sea and generate electricity to supply its own energy. Israel and Jordan approved the first stage of the project last month, Ginat said.

"You can't stop the sinkholes," Ginat said. But when people plan roads, buildings and other infrastructure, they should take note of the research, "and choose where to put things [based on] the knowledge we have about the sinkholes," he said.

Other areas of the world are also home to puzzling sinkholes. For instance, in Siberia, at least seven giant craters have been found since 2014, which scientists believe to be the result of the explosive release of methane gas from melting permafrost. Researchers have called for urgent investigation of the craters out of safety concerns.