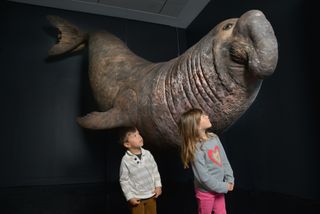 The new Life At The Limits Exhibit at the American Museum of Natural History in New York details the extraordinary abilities of animals, including the elephant seal, which can hold its breath underwater for up to two hours.
(Image: © © AMNH | D. Finnin)

The astonishing tardigrade — a microscopic animal that looks like a cross between a bear and a cushy pillow — can survive for 10 years without water, endure boiling temperatures and withstand the radiation, weightlessness and iciness of space. But it's only one of many animals with amazing and extreme abilities, according to a new exhibit at the American Museum of Natural History (AMNH) in New York City.

The exhibition, which opens Saturday (April 4), showcases the diversity of life on Earth, revealing how different species have developed incredible capabilities through natural selection.

Once visitors walk past a 10-foot-long (3 meters) tardigrade model, they can watch a video describing how species change over evolutionary time. As individuals reproduce, their offspring may have genetic mutations that neither of their parents had. Many mutations have little effect, and others may actually harm the individual, such as mutations in the CFTR gene that can cause cystic fibrosis in humans.

But some mutations can help the individual survive, and may be passed down to the next generation. If enough individuals in a species acquire this mutation, it may become a common trait.

For instance, most life needs a constant supply of oxygen to survive, "because oxygen is what enables an organism's cells to make energy," according to the exhibit. Humans breathe about 20 times a minute, but other animals breathe differently.

Elephant seals, for example, have evolved to hold their breath for up to two hours underwater. And the bar-headed goose can fly up to 30,000 feet (9,000 meters), the height of commercial airlines where oxygen is sparse, thanks to mutations that led them to develop extra-large lungs and extra-dense capillaries that supply oxygen to their flight muscles.

Natural selection also affects people. Tibetans, for instance, live at about 16,000 feet (4,900 m) above sea level. Many of them have mutations that help them breathe in the Himalayas, including EPAS1, a gene that regulates production of hemoglobin, a molecule that carries oxygen in red blood cells.

As visitors walk through the exhibit, they can see live creatures, including the amphibious axolotl, deadly mantis shrimp and shelled nautilus. The wretched smell of the corpse flower and the fragrant aroma of orchids fill the air, as visitors learn how each flower attracts pollinating insects.

Visitors can also explore a dark cave to learn how the olm, a blind salamander, has developed its sense of smell, hearing and bioelectricity to survive.

"People have always thought about [caves] as these evolutionary dead ends," Sparks said. "Darwin even referred to the creatures in caves as 'wrecks of ancient life.'"[Amazing Caves: Pictures of the Earth's Innards]

But, "in the exhibit, we kind of bring caves to life, and show that they're not evolutionary dead ends," Sparks said. "They foster evolution. Once [animals] actually fall into a cave, they can actually re-evolve pigmentation, eyes and move back out of the cave."

"It expands the possibility of where we could find life one day," said curator Mark Siddall, an invertebrate zoologist at the AMNH.

The exhibit ends Jan. 3, 2016, and will be available for purchase by other museums.