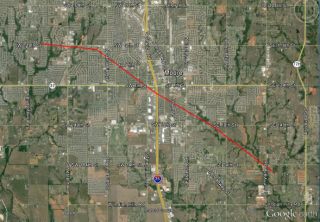 After some of the quietest three months of a U.S. tornado season in 60 years, severe thunderstorms and tornadoes ripped through Oklahoma and Arkansas yesterday.

A damaging tornado touched down outside Tulsa, Oklahoma, last night (March 25). One person was killed and several were injured when the tornado destroyed a mobile home park. A small twister was also reported in Moore, the Oklahoma City suburb that has been repeatedly ravaged by deadly twisters this decade.

The two weak tornadoes ended a long dry streak for the 2015 tornado season. For only the second time since the 1950s — when good record keeping began — the first three weeks of March were tornado-free throughout the United States, according to the National Weather Service's Storm Prediction Center in Norman, Oklahoma. A typical March sees about 120 twisters, the center reports. (Only March 1969 compares, without a single tornado until the 24th.) [The Top 5 Deadliest Tornado Years in U.S. History]

This is also the third March in a row with a low tornado count, the Storm Prediction Center reports. In March 2014, there were only 20 tornadoes, and March 2013 had 18 reported tornadoes. The lowest U.S. March tornado count was six, in 1951, though some tornadoes may have been missed because there was no Doppler radar yet.

So what's making tornadoes shirk the United States this year? The oddly calm tornado season owes a debt to the weather patterns responsible for the East's cold, snowy spring and the West's warm, dry drought.

A high-pressure ridge centered over the northwest Pacific Ocean is sending the jet stream on a swooping arc across the United States that delivers cold, dry Arctic air directly to the East Coast. With these chilly blasts hitting Tornado Alley for most of January, February and March, conditions favorable for tornadoes simply haven't shown up, storm experts said.

"Creating a tornado is just like baking an apple pie: You need certain ingredients in the atmosphere to create a tornado, and those ingredients just aren't there," said Victor Gensini, a severe storms climatologist at the College of DuPage in Illinois.

Gensini said these same atmospheric patterns were in place in 2014, another year with a lower-than-average tornado count.

Severe thunderstorms require wind shear (differences in wind speed and direction over a short distance); a source of lift; atmospheric instability (such as cold, drier air above warm, humid air); and moisture.

This week, southerly winds drew warm, moist air northward into the Central Plains, where it collided with colder air, spawning severe winds, golf-ball-size hail and a handful of tornadoes.

With yesterday's storms now moving eastward, Gensini forecasts a return to a persistent calm pattern for the rest of March. "I don't think we will see a tornado watch for the rest of the month," he told Live Science.

But don't expect the quiet to last. Tornadoes can strike any time of the year in the United States, and April, May and June are the big months for twisters in Tornado Alley. "We really haven't gotten to the heart of severe weather season yet," Gensini said.

And over the past three years, there have been deadly tornado outbreaks in Oklahoma and Arkansas in April and May, despite the dearth of twisters in earlier months.