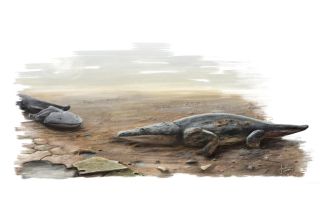 A salamander creature that lived between 220 million and 230 million years ago would've been the size of a small car.
(Image: © Steve Brusatte/Richard Butler/Octavio Mateus/Seb Steyer)

A small-car-size "super salamander" with a toilet-seat-shaped head may have perished some 220 million to 230 million years ago alongside hundreds of its kin when its lake home dried up, researchers say.

An international team of scientists found several skulls and various other bones — including those of the arm, shoulder and backbone of the amphibian, now called Metoposaurus algarvensis — in an ancient lake bed in southern Portugal. From these bones, the researchers determined that the creature was a new species of metoposaurid, an extinct group of large amphibians.

"Most modern amphibians are pretty tiny and harmless. But back in the Triassic, these giant predators would have made lakes and rivers pretty scary places to be," study co-author Richard Butler, of the University of Birmingham in the United Kingdom, said in a statement. [See Images of the Super Salamander and Its Fossils]

Like other metoposaurids, the amphibian sported a big, broad skull and hundreds of sharp teeth. When its jaws were snapped shut, the beast's head "really looks like a toilet seat," said study co-author Steve Brusatte, of the University of Edinburgh in Scotland. The skull was "circular-shaped with very thin, flat upper and lower jaws," and it would've flapped around this skull, snagging fish in the area's rivers and lakes, he added. Its puny arms and legs meant it likely couldn't move around much on land and thus would have spent much of its time in the water, Brusatte said.

Because the animals seem to have died together, the bones from several individuals were preserved. "We have a site where a lot of these animals died together and were preserved together," Brusatte told Live Science. "So, basically, it's a mass graveyard." The scientists have excavated just a portion of the site and plan to continue digging there.

When the salamanderlike animal was alive, the supercontinent Pangaea was just starting to break apart, and the animal's home would have sat along a rift valley where the continent was unzipping. Plenty of rivers and lakes fed into such a rift valley, Brusatte said.

"These amphibians would've ruled the rivers and swamps and lakes," in the area, he said. And while the amphibian would not have chased after large dinosaurs or mammals, the smaller individuals in these groups likely steered clear of the amphibian predators, Brusatte suggested.

At the time, many of the animal groups that are alive today — including crocodiles, lizards and salamanders (M. algarvensis was a distant relative of today's salamanders) — were just getting their start. "Part of the fabric of that world were these huge amphibians [metoposaurids] — they lived all over the place, especially in the low latitudes," Brusatte said.

This creature, along with most metoposaurids and half of Earth's species, died out at the end of the Triassic period, about 201 million years ago. The mass extinction opened the door to the rise of the dinosaurs, scientists say.

Brusatte and Butler — along with Octavio Mateus, of the New University of Lisbon in Portugal and J. Sebastien Steyer, of the French National Center for Scientific Research — detailed their discovery this week in the Journal of Vertebrate Paleontology.