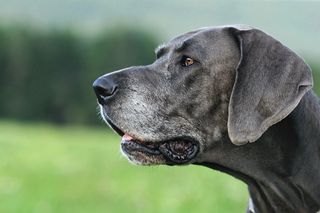 Dogs may have arrived in the Americas only about 10,000 years ago, thousands of years after humans first did, researchers say.

This finding might shed light on patterns of human migration into the New World, scientists added.

In the study, the researchers looked at DNA from 42 new samples taken from ancient dog remains and compared that DNA with 42 other genetic samples from prior studies. The scientists discovered four never-before-seen genetic signatures in the new samples, suggesting there was greater diversity among the ancient dogs in the Americas than previously thought.

The most surprising finding, the researchers said, was that that dogs may have arrived in the Americas only about 10,000 years ago. This date "is about the same time as the oldest dog burial found in the Americas," study co-author Ripan Malhi, of the University of Illinois at Urbana-Champaign, said in a statement. "This may not be a coincidence."

The long history between humans and dogs makes canines a window into human history, giving insight on ancient patterns of migrations, for example, the researchers said. The new finding suggests that dogs came to the Americas with a second wave of human migration, thousands of years after people first traveled to the Americas from Asia.

"Dogs are one of the earliest organisms to have migrated with humans to every continent, and I think that says a lot about the relationship dogs have had with humans," lead study author Kelsey Witt, a biologist at the University of Illinois at Urbana-Champaign, said in a statement. "They can be a powerful tool when you're looking at how human populations have moved around over time." [10 Things You Didn't Know About Dogs]

The point at which man's best friend evolved from wolves is hotly debated. Recent findings suggest that dogs may have been domesticated about 33,000 years ago, well before the first human migrants are thought to have crossed a land bridge from Siberia to North America, sometime after 17,000 years ago.

To study human migrations, researchers cannot always use human remains. "Living populations who are very connected to their ancestors in some cases may be opposed to the destructive nature of genetic analysis," Witt said in a statement. However, analysis of ancient dog remains is often permitted when studies of human remains are not, she said.

Prior research of ancient dogs in the Americas focused on DNA from the animals' mitochondria, the powerhouses of the cell. Mitochondrial DNA is far more abundant than the DNA from cell nuclei. Also, "mitochondrial DNA is useful when looking at population history because it is inherited maternally, and so it shows an unbroken line of ancestry, as opposed to chromosomes, which come in pairs — a paternal and maternal — and can exchange genes between them," Witt said.

The new study is the largest genetic analysis so far of ancient dogs in the Americas. Native Americans used dogs as hunters, herders, haulers, companions and sources of food.

Among the new samples, two came from ancient dog remains found in present-day Colorado, five were unearthed from a location in Canada's British Columbia and 35 came from a site in southern Illinois known as Janey B. Goode, near present-day St. Louis. The Janey B. Goode site is near the ancient city of Cahokia, the earliest known and largest city in prehistoric North America, which boasted as many as 50,000 residents in its heyday. People in the city lived amidst earthen mounds, some more than 100 feet (30 meters) in height.

The Janey B. Goode site was occupied between 650 and 1,400 years ago, whereas Cahokia was active slightly later, from about 700 to 1,000 years ago, the researchers said. Dozens of dogs were ceremonially buried at Janey B. Goode, sometimes lying back to back in pairs, suggesting that people there had a special reverence for pooches. In contrast, in Cahokia, dog remains, sometimes burned, are occasionally found with food debris, suggesting that dogs were sometimes were consumed, and that dog burials were uncommon.

The researchers also found unusually low genetic diversity within some dog populations, revealing that humans in those regions might have engaged in dog breeding.

"I was expecting to see a lot of diversity," Witt told Live Science. "Instead, we found that all the dogs we studied were very closely related — the population had very low levels of diversity.

"This was really surprising to me, and I think it's exciting because it's a pattern you don't find in many of the other sites that have been studied. It might mean that dogs in this region were being deliberately bred, or that there was just a very small founding population that came to the region."

The researchers also found that a number of the samples from prior studies were significantly genetically similar to American wolves, the researchers said. This suggests that some of these dogs interbred with wolves, or were even domesticated anew from wolves.

"Additional migration events following the initial migration have been suggested," Witt said. "Some previous studies have suggested that a second migration might have been from a different source population than [that of] the original migrants."

Further research is needed to confirm the new date for dogs' arrival in the Americas. The scientists' method of analysis leaves open the possibility that dogs arrived earlier in the Americas, the researchers said. They focused on a short part of the dog mitochondrial genome known as the hypervariable region, which is good to use "to get an idea of how individuals are related and assess diversity, but sometimes the relationships we find in the hypervariable region don't match up when we sequence the complete mitochondrial genome," Witt said. "It might be changing so rapidly that it actually masks some of the diversity, so dogs may have really arrived 15,000 years ago or earlier, but looking at the smaller region, it may look like they arrived much later."

The researchers plan to study ancient dogs in greater detail. Witt has already sequenced the full mitochondrial genomes of 20 ancient dogs, and more studies are planned. "The limiting factor here is definitely the quantity and quality of DNA in the ancient samples," Witt said. "DNA degrades over time."

The scientists detailed their findings online Dec. 18 in the Journal of Human Evolution.