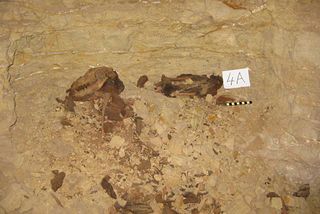 The excavation of a labyrinth of tunnels beneath the Egyptian desert has revealed the remains of millions of animals, mostly dogs and jackals. Many appear to have been only hours or days old when they were killed and mummified.

The Dog Catacombs, as they are known, date to 747-730 B.C., and are dedicated to the Anubis, the Egyptians' jackal-headed god of the dead. They were first documented in the 19th century; however, they were never fully excavated. A team, led by Paul Nicholson, an archaeologist at Cardiff University in the United Kingdom, is now examining the tunnels and their contents, they announced this week. [Image of mummified puppy remains]

They estimate the catacombs contain the remains of 8 million animals. Given the sheer numbers of animals, it is likely they were bred by the thousands in puppy farms around the ancient Egyptian capital of Memphis, according to the researchers. The Dog Catacombs are located at Saqqara, the burial ground for the ancient capital Memphis.

"Our findings indicate a rather different view of the relationship between people and the animals they worshipped than that normally associated with the ancient Egyptians, since many animals were killed and mummified when only a matter of hours or days old," Nicholson said. "These animals were not strictly 'sacrificial.' Rather, the dedication of an animal mummy was regarded as a pious act, with the animal acting as intermediary between the donor and the gods." [Prehistoric Cemetery Reveals Man and Fox Were Pals]

In 1897, the French Egyptologist Jacques De Morgan published a map of the necropolis of Saqqara, which included a plan for the Dog Catacombs, but no information about the date or circumstances of their discovery, Nichols wrote in the September/October 2010 issue of Archaeology Magazine.

"In fact, virtually nothing is known about these catacombs," he wrote.