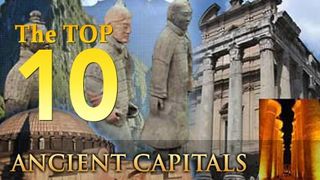 It's impossible to stroll through modern Rome and not bump into reminders of its ancient past. The Forum, the Colosseum and the Pantheon, just to name a few, are lasting testaments to the capital of an empire once made up of 2.5 million square miles, three continents and about 100 million people. The empire reached its zenith in 117 AD, when the emperor Trajan ruled from Rome and months-long gladiator games were held to celebrate the city's glory.

Democracy, math, philosophy, the Olympics-what didn't come out of Athens, the ethereal capital of ancient Greece? Athens fought long and hard, in conflicts on the sea and on land, to become leader of all Aegean city-states by the early 5th century BC. It celebrated its victories by building great temples like the Parthenon, the iconic symbol of art and architecture in ancient Greece. A plague-likely typhoid fever-contributed to the empire's fall.

Today it's shared by two continents as the Turkish city of Istanbul, but ancient Constantinople never once had to share the spotlight after Rome fell from grace in the 4th century AD. From that date through the Middle Ages, Constantinople was the world's largest and richest city, becoming the center of the new Roman Empire, the Byzantine Empire and finally the Ottoman Empire. Art and learning flourished in its universities and cathedrals, including the spectacular Hagia Sophia.

Famous for its "wondrous" hanging gardens, the ancient Mesopotamian city of Babylon had as turbulent a history as its location in present-day Iraq suggests. Everyone from the ancient Assyrians to Alexander the Great wanted to get their hands on this strategic location, and it would become the capital for many ruling groups over a period of several thousand years. King Nebuchadnezzar II, creator of the gardens, led the city during its splendid architectural heyday around 600 BC.

All roads in the Incan empire once lead to Cuzco, bustling capital in the Andes Mountains from the early 1400s until its discovery by European explorers in 1532. To retreat from the big city, Incan kings would head to their summer home of Machu Picchu further up in the mountains.

Legend and bits and pieces of historical fact -indicates that Tenochtitlan was once the world's biggest and most beautiful city. The capital of the great Aztec empire, which eventually morphed into today's Mexico City, had about 300,000 inhabitants when Spanish conquistadors arrived in 1521. Despite being built atop a lake according to the wishes of an important Aztec deity, ancient engineers made Tenochtitlan as efficient as any city in Europe with a complex system of causeways and canals.

Most people think of Cairo and the Great Pyramids when they think of ancient Egypt, but the heartbeat of the magical pharaonic dynasties actually beat much further up the Nile at Thebes. Thebes was the ruling capital of ancient Egypt during its most dominant eras, beginning with the Old Kingdom 4500 years ago, and is home to two of its most revered temples at Karnak and Luxor. Most of Egypt's holy rulers are also buried nearby in the famous Valley of the Kings.

At 1,800 acres in breadth and the only one of its kind in Africa, the complex of Great Zimbabwe confounded early European colonialists, who couldn't believe that sub-Saharan peoples were capable of its creation. They were, in fact, and built the complicated structures sometime after 1200 AD, when a wide-reaching empire of about 20,000 Shona cattlemen ruled the area.

The Chinese city of Xi'an was the central stronghold for all of the country's most important ancient dynasties going back 3,000 years. Tourists flocking to see the city's Terra Cotta Army, 6,000 unique and life-size statues buried to protect the tomb of the great Zhou emperor Qin Shi Huang, has made Xi'an famous in modern times. That will only multiply when the emperor's sprawling mausoleum, rumored to hold invaluable treasures and rivers of mercury, is finally opened by archaeologists.

With upwards of 30,000 inhabitants at its peak in about 1100 AD, Cahokia, Illinois remained the United States' first and biggest real city until the Northeast's population exploded in the late 18th century. This urban center of the Mississippi culture had organized leadership, commerce and a penchant for mound-building. Monk's Mound, the largest at 100 feet tall, dominates the site and was probably a mighty foundation for the home of the resident spiritual leader.