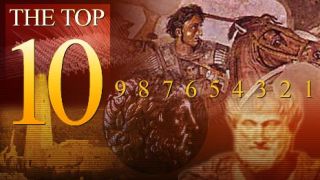 In the wake of Oliver Stone's epic movie about the Macedonian conqueror's life we at LiveScience believe a reassessment of his triumphs is needed to right the wrongs inflicted by Colin Farrell's hair, Angelina Jolie's lips and Val Kilmer's performance.

Trained in philosophy by Aristotle

How many of history's great leaders can claim to have had one of the greatest philosophers of all time as their personal tutor?

Out of all the intellectuals at the prestigious Academy in Athens, Alexander's father, Philip, chose Aristotle (384-322 B.C.) to instruct his 13-year-old son. Aristotle, who had been the student of Plato, was offered a handsome salary to move to the town of Mieza, deep in the Macedonian countryside. In the nearby Temple of the Nymphs, Aristotle taught the young prince geography, zoology, politics and medicine.

Alexander was greatly influenced by the philosopher's teachings. On later military campaigns, Alexander brought scientists with him and sent plant and animal specimens back to his former mentor.

Philip, Alexander's father, bought a horse called Bucephalus for the exorbitant price of 13 talents (1 talent = 27 kg of gold), but the rambunctious animal bucked all comers. Watching the futile attempts, Alexander noticed that the animal was frightened by its own shadow. He bet his father that he could mount the horse. By turning Bucephalus toward the sun so its shadow was behind it, Alexander was able to climb into the saddle and gallop around triumphantly. To which his father said: "My boy, you must find a kingdom big enough for your ambitions. Macedonia is too small for you."

Alexander's father, Philip, was stabbed by one of his bodyguards in 336 B.C. at a wedding banquet. Although few scholars think that Alexander was directly involved in the assassination, he wasted no time dispatching any possible rivals - even instructing his mother, Olympias, to execute the infant son of Philip's last wife.

Alexander spent the next two years quelling rebellions in the lands conquered by his father. Thebes revolted on a false rumor that Alexander was dead. Showing no mercy, Alexander slaughtered or sold into slavery 30,000 inhabitants before leveling the city to the ground. After such an example, there were no significant uprisings in Greece during Alexander's 12-year Asia campaign.

The most distinctive element of the Macedonian war machine was the phalanx. Developed by Alexander's father, the phalanx was a tight formation of soldiers - usually 16 by 16 - carrying shields and sarisses, which were 20-foot-long spears made of cornel-wood. The back rows of the phalanx held their sarisses upright, hiding the movement of forces behind the lines, while the front rows kept the enemy at bay with an impenetrable wall of sharp pikes. On flat terrain, the phalanx proved unbeatable.

Alexander also had at his disposal light auxiliaries, archers, a siege train, and a cavalry. Thanks to his father, Alexander's army was largely a professional one. In earlier times, Macedonians would stop fighting during the harvest, but Philip and Alexander paid the men enough that they could afford to be soldiers full-time. This meant they were often better trained than their adversaries.

After solidifying his rule of Macedonia and Greece, Alexander looked east to Asia and the Persian Empire, which was led by Darius III. Alexander assembled an allied Greek army of 5,000 cavalry and 32,000 infantry to avenge the Persian invasion of Greece in 490 B.C. With 60 naval vessels, Alexander crossed the Hellespont (a narrow strait separating Europe and Asia - now called the Dardanelles) in 334 B.C. From his ship, Alexander threw his spear onto the shore. As he took his first steps in Asia, he pulled his weapon from the sand and declared that these lands would be won by the spear.

But the first order of business was a little tourism! Being quite fond of the Trojan War story -- to the point of keeping a copy of Homer's Iliad tucked under his pillow -- Alexander made a special trip to Troy to perform several sacrifices and to trade some of his armor for a sacred shield in the Temple of Athena.

According to legend, the Phrygians, who lived in what is now central Turkey, were told by an oracle to make king the first man to ride into town in an oxcart. As luck would have it, this man was Gordius, a poor peasant. After his coronation, Gordius dedicated his cart to the god Zeus and tied it to a pole outside the temple. The knot was made of cornel bark, which hardened over time. It was said that whoever untied this intricate knot would conquer all of Asia.

Alexander could not pass up such an opportunity, but there were no ends to the knot for him to even get started. In frustration, he sliced it in half with his sword, proclaiming, "I have loosed it!" The Gordian Knot has since become synonymous with an intractable problem that requires an unconventional solution.

After defeating the Persians at the Battle of Issus, Alexander decided to enter Egypt, which had been under Persian rule for almost 200 years. The Egyptians despised the Persians for their heavy taxes and religious intolerance. They gladly anointed Alexander as pharaoh, initiating a cultural exchange between Greece and Egypt that lasted for the next three hundred years.

While in Egypt, Alexander also made the dangerous journey across the desert to the shrine of Zeus Ammon. It is said that he was guided by ravens and blessed with rain. Upon his arrival, the priest apparently told him he was the son of Zeus. Whether or not Alexander believed in his own divinity, he played the stories to his own advantage.

Besides razing cities, Alexander also founded about 20 new ones, naming most of them after himself. The most enduring of these is Alexandria on the coast of the Nile delta. In a superb natural harbor where the Persians had once erected a fortress, Alexander had his architects build a grand city along Greek lines.

Alexandria later developed into a cosmopolitan port, with schools, theater, and one of the greatest libraries of antiquity. Greeks ran the city's administration, but Egyptians were allowed to keep their customs and religion -- though they could only become citizens if they learned Greek and accepted Greek traditions.

After less than a year in Egypt, Alexander resumed to chasing after the Persian emperor, Darius III. At the plains of Gaugamela, Darius assembled an army of 200,000, which included cavalry wearing chain mail and chariots with blades spinning out of the wheels. Alexander's 47,000 men attacked Darius' flanks, splitting the Persian forces, while Alexander charged into the center. The Persians broke ranks and were routed. Darius escaped by horseback, only to be later killed by one of his own men.

Having conquered the Persians, Alexander was named King of Asia. He took Babylon and Persepolis, the Persian capital. In an attempt to solidify his rule, he began to dress like a Persian, and married a Persian dancer named Roxanne. His men found it unbecoming of their king that he thought it necessary to please a defeated enemy.

Extended Empire Into India; Partied -- and Died -- Like a Rock Star

Alexander believed Asia ended just on the other side of India. Wanting to conquer the continent, he persuaded his men to march east.

The Indian king Porus and his elephants fell to Alexander, but the weather and the mountains wore out his men. It soon became clear that Asia was larger than believed. With his campaign suffering from "mission drift," Alexander succumbed to his men's pleas and turned back. But he decided on a circuitous route: down India's rivers to the ocean, then along the coast back to Persia.

It was probably Alexander's greatest mistake, as 15,000 of his men died of starvation or heat in the Gedrosan Desert -- more than all those he lost in battle. The journey may have taken its toll on Alexander as well. At a banquet back in Babylon, he drank excessively -- as usual -- then fell ill of a fever, possibly due to malaria. (Though a number of causes, including poisoning, have been suggested.) He died a few days later, just shy of his 33rd birthday.