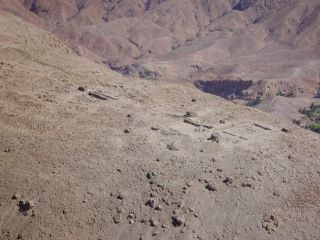 Aerial view of the mountaintop Wari brewery and palace, burned down at an elaborate ceremony 1,000 years ago that involved feasting, drinking and vessel smashing. Photo by P. R. Williams, Courtesy of The Field Museum

An ancient brewery from a vanished empire was staffed by elite women who were selected for their beauty or nobility, a new study concludes.

The finding adds to other evidence that women played a more crucial role in ancient Andean societies than history books have stated. It may also in some ways reflect modern drinking traditions in the Andean mountains, where women get drunk as much as men, researchers say.

The brewery, on a mountaintop in southern Peru, cranked out hundreds of gallons of beer every week. The 1,000-year-old facility was part of the Wari empire, which predated the Incas.

Archeologists have pieced together the last days before the city was evacuated for unknown reasons. A final batch of chicha, as the drink is called, was prepared. A week later, nobility drank the chicha as part of a big feast and ceremony. More than two dozen precious ceramic vessels -- the chicha mugs -- were tossed into embers of a fire and smashed as sacrifices to the gods.

Then the residents mysterious fled.

"Our analyses indicate that this specialty brew was a high-class affair," said Patrick Ryan Williams, Curator of Anthropology at the Field Museum and co-author of the research report. "Corn and Peruvian pepper-tree berries were used to make the beer, which was drunk from elaborate beakers up to half a gallon in volume."

Water had to be brought up from a thousand feet below the city's 8,000-foot mountaintop perch.

Archaeologists have spent years excavating the remnants of the city, which sits on a mesa called Cerro Baúl. The latest findings were published Monday in the online version of the Proceedings of the National Academy of Sciences.

Inside the brewery, which was first discovered and announced last year, researchers have since found several elegant metal shawl pins sprawled across the floor. The pins were not found elsewhere in the city.

"The brewers were not only women, but elite women," Donna Nash, an adjunct curator at the Field Museum and part of the study team, said Monday. "They weren't slaves, and they weren't people of low status. So the fact that they made the beer probably made it even more special."

It's not clear why the shawl pins were on the floor. But the brewery would have been warm from the fires used to heat brewing urns. "Perhaps the heat forced the brewers to remove their shawls, and the pins were lost in the process," speculates Williams.

It's also possible the women left the pins as part of a going-away ceremony.

Evidence shows the brewery was set afire, then the ceremonial mugs were tossed into the fire. "Are the women throwing in their shawl pins at the same time guys are throwing their cups? It's a possibility," said Mike Moseley from the University of Florida.

"This is the only place where two empires were making face-to-face contact, and it's that contact that helps explain this site – it's both defensible and very impressive," Moseley said.

The discovery suggests a precursor to an aspect of Incan society documented by Spanish observers after conquest in the 15th Century: Noble Incan women were that society's top brewers.

Bits of Wari society may have carried forward even to today, says Susan deFrance, an assistant professor of anthropology at the University of Florida. Modern Andean drinking culture is unlike many Western societies, in which women tend to drink less.

"There's a lot of equality in terms of how men and women drink in the highlands of Andes," deFrance said. "Women will get as rip-roaring drunk, if not more so, than men."